Anyone who designs, builds, runs or repairs injection molds knows the importance of having optimum control over heat profiles to reduce material waste and maintenance downtime due to nozzle leaks or just poorly molded parts.

Eliminating the risks of overheating and leaking is therefore a much sought after objective, and it makes economic sense to consider incorporating internally heated hot runner nozzles or molding machine nozzles into the mold design or production process because they save money. 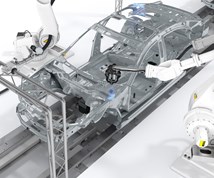 For example, if one externally heated nozzle leaks in a hot runner system, more often than not the leaked plastic will follow the wire channels and flood them, causing all of the nozzles and channels to become one big plastic mess. It can be an expensive repair job if the entire heating system is affected (see Figure 1a,b).

Because a hot runner system is often a large part of the overall cost of a mold, some people stress about the warranty of the system, but they don’t consider the frequency of burnouts or other issues that can cost dearly in downtime. Utilizing internally heated hot runner nozzles alleviates the stress because they are virtually fail-proof compared to traditional, externally heated systems. They are like an insurance policy against downtime and replacement part costs.

In most cases, internally heated hot runner nozzles can be retrofitted on existing hot runner systems. It should also be noted that they work well with hot halves available on the market that offer the same features.

With an externally heated nozzle, the sensitive parts of the heating system—such as the thermocouple, heating coil, sleeve, etc.—are located on the outside of the nozzle body. As the coil is heated it expands, causing a gap between itself and the nozzle body so that it cannot touch the nozzle body uniformly. Because of this, the coil must be heated at a higher temperature to properly heat the plastic. Not only is there a risk of heating unevenly, but the higher temperature also means there is a risk of overheating and burning out the coil (heater failure).

This is not so with an internally heated nozzle. Because the insulation around the heating wire is solidly compacted to maximum density it eliminates any air voids around the resistance wire and surrounding nozzle bore. The heater inside the nozzle is an integral part of the body, so it resists burning out and contributes to more efficient heating. How? The heater element is able to run cooler due to the highly dense insulator, which carries away heat produced on the surface of the resistance wire when the heater is energized. So not only does it run more efficiently, it also helps prolong the heater life.

Another notable benefit of internally heated nozzles is the location of the thermocouple. The thermocouple and the heating element are located much closer to the gate, at the end of the nozzle, so they deliver heat at a very precise temperature. The result is a better heat profile and more controlled melt temperature and, therefore, better molded part quality. With externally heated nozzles, the nozzle may be heated properly, but there is a risk that the nozzle tip is not because the thermocouple stops short of the gate. Add to that the structure of the external coil and temperature profiles may be anything but consistent.

Granted, if the heating coil on an externally heated nozzle burns out, it can conveniently be replaced without removing the mold from the press—as long as no leaking has occurred. This is not possible with an internally heated nozzle, but
it’s clear the benefits outweigh the slim chance of the heating element burning out and, like other systems, nozzle tips and seals are replaceable at the molding machine.

Besides the internally heated hot runner nozzle, there is another product available that is just as unique: the internally heated machine nozzle, which shares many of the same features. As shown in Figure 2, the entire unit is fully sealed. The heater and replaceable internal thermocouple is located directly behind the nozzle tip, which ensures an accurate melt temperature reading.

While there is little, if any, need for replacement parts when using an internally heated hot runner nozzle, in the rare instance that the thermocouple does fail, it can be quickly and easily changed out while the heating element remains intact—definitely a savings in time and cost. This is not possible with some styles of externally heated nozzles, as too often the entire coil must also be replaced.

“We had an application with a high end industrial product that had both high visual and dimensional demands. We were running around 30 percent fall-out, molding a wide spec resin that our customer required us to use. We had already tried using a cold runner mold and then a hot sprue with no success. I knew about internally heated nozzle bodies, but had never tried them. We installed one of them on the molding machine and our scrap rate dropped to less than 5 percent. That’s a huge difference and it gave us absolute control over the heat in the material, which had been problematic until these nozzles were used. It worked smoothly and our technicians, who previously had to deal with uneven heating of the material, could let the mold run without daily adjustments, saving valuable downtime. The internally heated machine nozzles are expensive compared to standard machine nozzles with band heaters, but they are worth it when you look at the savings in material and processing time.”

Panos Trakas is president of Melt Design, Inc., a company he founded in 1983. Based in St. Charles, Illinois, Melt Design specializes in hot runner systems and components for production tooling and holds several product patents.