Cavalier Tool & Manufacturing Ltd. of Windsor, Ontartio, Canada, produces over 200 medium-to-large molds each year for tolerance-critical parts for injection molding, structural foam, multi-shot injection, gas-assist, and injection/compression processes. The company serves a diverse customer base in the automotive, recreational vehicle, agricultural equipment, commercial truck, medical equipment and consumer markets. Here, Trevor Locher, Cavalier EDM programmer checks the progress of a 10-foot/3.1-meter mold that is so long it exceeds the capacity of the company’s biggest sinker EDM tank. Dielectric fluid is being sprayed into the area of the burn. Image courtesy of Cavalier Tool & Manufacturing Ltd.

Solution: Purchased one, and then another, OPS Ingersoll high-speed, five-axis hard-milling centers.

Results: Moldmaker could now mill much faster and more accurately that it brought all graphite electrode production back in-house and increased mold production rates.

Known in the industry for its quality, precision and speed-to-market, Cavalier touts its ability to be 20-30% faster than its global competitors. “Whoever removes metal fastest, is busiest,” says Brian Bendig, Cavalier president. To that end, Bendig travels the globe seeking out the newest and most innovative technology to ensure his equipment is state-of-the-art; he invests equally in training and cross-training for employees. However, five years ago, the company faced a serious production bottleneck. It couldn’t machine graphite electrodes fast enough to keep up with its new sinker EDMs, which the company uses extensively during mold production.

“We’ve been EDM our molds for over 40 years to burn in features that we can’t efficiently cut,” explains Bendig. “We produce thousands of unique electrode forms in Poco’s EDM-3 graphite [from Poco Graphite, Inc., an Entegris, co., Decatur, Texas], which is an ultrafine-grained, high-strength but very dense product that — for graphite — is hard to cut.”

In 2012, Cavalier became the first shop in Canada and the second in North America to purchase an Eagle 1200 gantry sinker EDM from OPS Ingersoll Funkenerosion GmbH (Burbach, Germany). Through unique technology that OPS Ingersoll pioneered, its sinker EDMs use less energy and reduce graphite electrode wear by one-third.

“A few years before, OPS Ingersoll had introduced new technology on their sinker EDMs — in a part of the industry where there’d been no significant breakthroughs in decades,” notes Dan Meehan, president, Performance Machinery LLC of Sterling Heights, Michigan, a local distributor representing OPS Ingersoll and other equipment. “Through their generator settings they can change the spark- discharge waveform to adjust to gap conditions, lowering energy usage and electrode wear, and cutting graphite costs dramatically. We knew that would be a game-changer for North American moldmakers.”

“Making an investment in that one sinker EDM saved us more than $120,000 CND in consumable and operational costs the first year,” recalls Bendig. “Before, we made two-to-three electrodes for every burn location on a mold because the electrodes wore out before we finished. With the Eagle EDM, electrode wear was so much lower that, in most cases, we only needed one electrode per burn location.”

Given the volume of molds Cavalier produces, Bendig was back buying two more Eagle 1400 gantry sinker EDMs in 2015. Despite being able to produce fewer electrodes per burn location, increased business during that period — Cavalier grew from $8-million to $30-million CND in just five years — meant that older milling machines couldn’t keep pace with newer sinker EDMs. Hence, Bendig was forced to farm out approximately $500,000 CND in electrode machining annually. Given Cavalier’s commitment to continuous improvement in all areas of its organization, it was time to debottleneck graphite machining.

Bendig again turned to Performance Machinery to explore options for a new milling center. Meehan flew with him to Germany to visit OPS Ingersoll’ factory. Although he was impressed, Bendig wasn’t quite sold. In fact, he arranged for a number of leading machinery OEMS to participate in a test-cut competition to see whose milling center was fastest, smoothest and most accurate.

Cavalier’s five-axis machine, with the 36,000-rpm spindle, allowed the company to manufacture multi-sided electrodes in a single setup, which was a key business strategy.

To determine which machinery OEM had the best milling center, Cavalier modified an earlier design developed by Okuma Corp. (Oguchi, Japan) and set up a test-cut competition for machine makers called the “angry monkey.”The clear winner of the test was OPS Ingersoll, which was 30% faster than some other competitors.

OPS Ingersoll’s Eagle five-axis hard-milling machines are designed to mill both graphite as well as hardened steel quickly and efficiently. These bridge-style machines are very stiff, stable, and accurate so the mills can run at high rpms. A composite/concrete base provides high damping. The systems also use twin ball screws in the X and Y axes for high-speed acceleration/deceleration and provides high thermal compensation in all axes. Image courtesy of OPS Ingersoll Funkenerosion GmbH

For its sinker EDM electrodes, Cavalier favors an ultrafine-grained, high-strength but very-dense form of graphite that is hard to cut. Here are electrodes that already have been used to cut features into molds. Cavalier retains the electrodes until each customer approves its newly delivered mold.

Usage readouts for the OPS Ingersoll sinker EDMs and five-axis milling machines showing the latter are nearly fully maxed out.

Trevor Locher, EDM programmer, checks the burn before removing a mold from the sinker EDM.

“The thing you have to understand about Brian is that he’s a genius and he’s really looking closely at a machine’s design and construction — he literally picks the machine apart,” laughs Meehan. “He created a test called the ‘angry monkey’ and got the best machinery OEMs to compete with each other to see whose machine provided the best performance. Forget about relationships, you had to win this contest fair and square if you wanted to sell him a machine.”

Based on an earlier design developed by Okuma Corp. (Oguchi, Japan), the angry monkey as adapted and modified by Cavalier is roughly 4 by 4 inches/102 by 102 millimeters and is designed to put milling and cutting machines through their paces. It can be used on three- or five-axis machines and can be machined with just three or four cutters. Cavalier specified the speeds, feed rates, stepover and workpiece (P20 steel).

“The way we’ve written the program, it’s designed to constantly transition left, right, up, down, so it uses all machine axes at [nearly] the same time,” explains Bendig. “If a machine is loose or doesn’t respond well, it will fight the axes all the time and leave dimples and divots all over the workpiece. I wouldn’t let the machinery OEMs see the program ahead of time, so they couldn’t modify it or practice with it. I’d bring the program in on a memory stick along with my own material and cutters so I could verify that all tests were run the same way. We made sure that the mill being tested was the only variable in the test. All other variables — including spindle speed, feed rates, cutter path set over and even cutters — were controlled so only the CNC mill’s performance was being tested. And to be fair, we only compared one-meter machines against one-meter machines and so on.”

Many machinery OEMs were invited to participate and ended up letting Bendig run his test on their equipment. Ironically, other machinery OEMs heard about the test, obtained the program and continued to send Bendig samples for months after the competition ended.

“Some companies didn’t like the terms of the competition but, at other facilities, the president of the corporation spent the day with me and said, ‘We don’t have customers that do this,’” chuckles Bendig. “What the unhappy companies didn’t understand is that I wasn’t going to buy the cheapest machine possible. I check off every box and the price of the machine goes up as I add features.”

With the competition over, four machine makers were out in front of the others, but there was no doubt about the winner.

“Oh my gosh, OPS Ingersoll was so fast — it was 30 percent faster than some of the other competitors, its mill is that good,” recalls Bendig. “They absolutely smoked our test. It was obvious they knew what they were doing.”

As electrode production increased, the Eagle V9 – which Bendig initially planned to use for both graphite and steel – got so busy that a year later he bought another Eagle milling center.

“Additionally, the Eagle V9 uses twin ball screws in the X and Y axes for high-speed acceleration/deceleration, thermal compensation in all axes and a Heidenhain controller [from Heidenhain GmbH, Traunreut, Germany],” adds Hallmann. “Cavalier opted for this style five-axis machine, with the 36,000-rpm spindle, so it could run at higher feed rates with shorter, more stable cutters for the ultimate in accuracy and repeatability. That allowed them to manufacture multi-sided electrodes in a single setup, which was one of their  key business strategies.” With better surface finishes, the Cavalier team also found there was less and often no hand labor afterward.

“Once we purchased our first Eagle V9, we were able to mill graphite four times faster and 10 times more accurately than we could with our previous machines,” adds Bendig. “The V9 was so good that we pulled all outsourced electrode production back in house. And when other moldmakers heard about our productivity leap, OPS Ingersoll sold 16 more Eagle milling centers in this area.”

As electrode production increased, Cavalier’s Eagle V9 — which Bendig initially planned to use for both graphite and steel — got so busy that a year later the company purchased another Eagle milling center—this time an Eagle V5.

“Most of our electrodes are fairly small, so we didn’t need another big machine with a lot of travel like our V9,” adds Bendig. “Plus, the V5 offered a larger tool changer and spindle speeds of 42,000 vs. 36,000 rpm on our V9. These days we keep both machines running at near 100-percent capacity. We use RFID technology controlled by Delcam software (Delcam, Birmingham, U.K.) on all our workpieces, and our Eagle milling centers are connected to Eagle sinker EDMs by a 192-position robot using an OPS interface so everything talks to everything else and we can alter anything at any point along the way.” 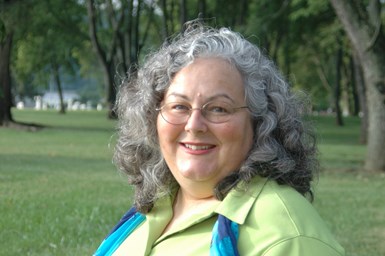 A long-time member of SAE and SPE, she has organized and managed large technical sessions and conferences for both organizations as well as for the former Structural Plastics division of SPI. For 15 years, she was a board member and the communications chair for the SPE Automotive Division. She also was editor of the 1994 McGraw-Hill book Structural Analysis of Thermoplastic Components. She has provided writing and communications services for the global plastics and composites industries since 1984. 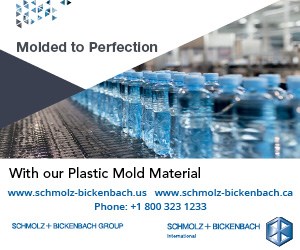 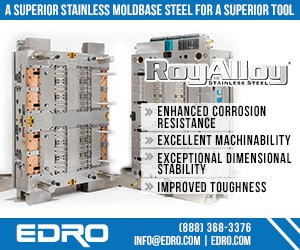