David Bourque displays mirror-like finish on an inset for one optical part.

One way a small mold shop can create a viable business is by applying expertise in a technically demanding area to different but related markets. ABCO Tool & Die Inc. (Hyannis, MA) has built a successful operation by using its capabilities in fabricating optical molds to get programs in a number of end-uses, including alternative energy. 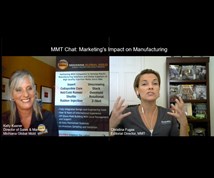 The company’s latest market is solar panel lenses, primarily Fresnel lenses. These use ridges to focus sunlight on a material whose atoms, energized by solar radiation, release electrons that are converted to electricity. ABCO started in this area by word-of-mouth and used its knowledge of optics to improve lens performance.

“We build these molds with proper form and figure on the optical surfaces to get an efficient distribution of light,” Bourque says. “All the principles used in eyewear apply here.”

ABCO’s experience with optical molds gives it the knowledge of how tools and inserts should be designed to maximize visibility, or in a solar lens, refractive index. It’s a skill most customers don’t have and conventional moldmakers don’t know. Bourque says ABCO regularly discusses esoteric issues of lens design with end-users and recommends critical mold design modifications.

While he doesn’t detail ABCO’s techniques for perfecting optical molds, Bourque says two factors always affect design: alignment of mold halves to assure precise tolerance of parts, and surface finish, which is “crucial to the seamless transfer of light.”

Customers usually have a solar lens designed when they come to ABCO. Once plans are reviewed; however, “real-life manufacturing comes into play,” meaning Bourque and his engineers often spot problems in designs that affect machining, polishing and other tooling aspects. One Fresnel lens was designed with sharply pointed ridges. Bourque knew this would impede machining and argued successfully for adding 0.0010- to 0.0015-inch radial grooves between the ridges.

The company also designs fixtures for machining inserts. Most of this is done to protect the edges and other areas of inserts that have challenging sweeps and shapes.

Fixtures were designed in at least one case to assure the precision placement of inserts in a new machining center ABCO purchased from Makino (Mason, OH) late last year. Bourque declines for competitive reasons to identify the model, but says it has a claimed machining accuracy of +/-2 microns. The new fixture has an adjustable key to keep inserts properly aligned with the tolerance capabilities of the machining center.

The system was a major investment, but one Bourque says was necessary despite the recession. Not only is it precise and capable of running unattended for 30 hours, but produces near-mirror finishes on parts.

ABCO has considerable expertise in polishing, and routinely produces molds with mirror-like finishes. The company has in recent years used hard die milling in place of EDM for many finishing operations. Bourque says this is faster and more accurate than EDM, and “keeps us competitive.” It is also why he likes Matsuura machining systems (distributed by Methods Machine Tools, Sudbury, MA), which he says are “very rigid” and thus ideal for the operation. Three of ABCO’s seven milling machines are from Matsuura. (The company also has two CNC ram EDMs, two CNC wire EDMs and a CNC lathe.)

In a year where recession is affecting everyone’s business, Bourque, who declines to reveal figures, says sales this year could be even with 2008. The customer base, though, is made up of “pretty solid companies,” and in the relatively small world of optical manufacturers, ABCO is regarded as a good company to work with, which bodes well for post-recession opportunities.

Solar lenses are about 10 percent of business. Ophthalmic, industrial and military sales are each about 30 percent, and security lenses are a small but growing segment.

ABCO has built optical molds since 1983. Raymond Bourque, David’s father, started the company in 1972 as a general-purpose shop. Working through contacts David had at Polaroid, ABCO began “cutting its teeth” on optical molds. By the time he took over in 1983, the company was on its way to being a specialty shop.

Bourque’s strategy is to focus on long-term programs. One military contract ABCO has, which includes maintenance, runs for 10 years. Maintenance is an important market, accounting for 15 to 20 percent of business. Optical tools are frequently scratched, he says, and ophthalmic inserts replaced regularly.

Bourque believes solar arrays will go one of two ways. The first is as a commodity—size doesn’t matter, panels are inexpensive and require few design changes. The other is miniaturization—panels are smaller, more expensive, but more efficient. As such, they will require high-tech optical molds, a good fit for ABCO.

For more information from Patrick A. Toensmeier e-mail toensmeier@ sbcglobal.net.