Founded in 1919 and reportedly one of the oldest die casters in the U.S., Twin City Die Castings Co. maintains three facilities: one in Minneapolis (company headquarters) where it casts aluminum only; one in nearby Monticello, Minn. (shown above), where it casts magnesium exclusively; and another in Watertown, South Dakota, where it also casts aluminum. The company serves customers in the automotive, recreational equipment, industrial, defense/aerospace, renewable energy, computer technology, heating/ventilation/air-conditioning, hand tool and medical markets. Photo Credit: Twin City Die Castings Co.

Founded in 1919, Twin City Die Castings Co. says it’s one of the oldest die casters in the U.S. The company is headquartered in Minneapolis (which casts aluminum only) and maintains two other facilities in nearby Monticello, Minnesota (which casts magnesium exclusively) and Watertown, South Dakota (which just casts aluminum). Between the three facilities, the company employs 190 associates, has a total of 184,000 square-feet/17,094 square-meters of workspace and operates 25 casting presses ranging in size from 350 to 1,000 tons/tonnes. The company casts parts ranging in size from that of coins to large door frames for off-road vehicles and serves customers in the automotive, recreational equipment, industrial, defense/aerospace, renewable energy, computer technology, heating/ventilation/air-conditioning, hand tool and medical markets. No single customer comprises more than 20% of company revenues and no single industry represents more than 40%. The die caster says its commitment to a diversified customer base has proven useful time and again when one industry contracts, but others stay strong. 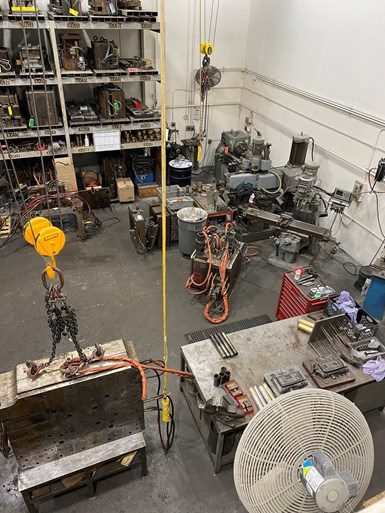 Twin City Die Castings is both ITAR-registered and IATF 16949:2016 certified. Employee-owned since 2017, the company reports it has maintained profitability for over 30 years and continues to reinvest an average of $3.5-million USD in profits back into the company annually. It uses the high-pressure casting process to produce parts. This process produces stronger, denser parts with higher mechanical performance—potentially in thinner wall sections—but it’s also harder to control, which is why not every die caster uses it. In addition to casting aluminum and magnesium, Twin City designs die-cast parts and tools, although die production is subbed out to other shops. It also deburs, blasts/power washes, machines, heat treats, polishes, plates/anodizes/e-coats, paints, rubber overmolds and pad prints/silk screens die-cast parts and offers subassembly, bonding, custom CNC machining and more.

Die casting is a hot and corrosive process. Molten aluminum is typically held in the furnace at 1,100°F/593°C and magnesium at 1,250°F/677°C, while dies are typically operated at 350-425°F/177-218°C. Die soldering (die sticking) is one of the most significant and most persistent problems die casters face. It’s a phenomenon in which molten metal contacts the surface of a die/die component, heating the steel above its soldering critical temperature, causing iron to dissolve into the melt while, at the same time, molten metal diffuses into the die surface, creating a layer of intermetallics at the interface. 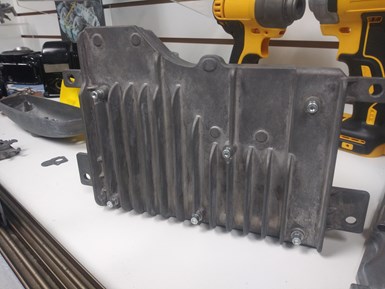 A persistent problem that die casters face is corrosion caused by die soldering (die sticking), where molten metal welds to the surface of the die, causing part sticking, damage to the tool and its components and a poor surface on the part. To fight the problem, casters often have to stop their process to clean the die and its components, and some components require frequent replacement. This leads to increased costs and scrap rates, loss of process and shot-size stability, and higher cost of quality, plus die casters have to maintain large stores of spare parts.

Over time, this layer builds up. Upon cooling the die and part, the molten metal solidifies and interlocks at the surface, welding the two components, resulting in sticking of parts, damage to the tool and a poor surface on the casting. This reaction also causes microcracking, pitting, thinning and weakening of the die and die components, necessitating constant cleaning. That’s why casting dies typically only last for 100,000-150,000 aluminum parts and 200,000-300,000 magnesium parts before significant repairs or replacements are needed. (Contrast that with a well-maintained steel injection mold, which can produce a million shots before significant repairs or replacement are required.)

“The most notable improvements are reductions in scrap, downtime, maintenance and the cost of quality as well as stability of cycle and shot size. Additionally, casters no longer have to maintain huge drawers of spare pins, seriously reducing costs and management tasks long term. When you’re changing pins every few days, the costs are going to be insane,” Rumore adds.

A classic example of the soldering issue is what can happen to core pins used to produce holes in cast parts to reduce secondary drilling. According to Dan Sheridan, toolroom/die repair supervisor at Twin City’s Monticello plant, a large job his facility had been casting in magnesium—a two-piece, roughly 6 x 6-inch/15 x 15-centimeter frame for the center display panel on passenger vehicles—was proving very challenging to produce. The casting process had to be stopped frequently to clean and polish core pins to reduce soldering. Given that their four-cavity die used four custom core pins/cavity and that Twin City was producing 240,000 pieces per year, the downtime and productivity losses were becoming costly.

“We’d already tried several premium-priced coated products that just didn’t work for long,” Sheridan explains. “They’d start out helping, but too quickly, the coating would come off, and the benefits would be gone. That was frustrating because, on average, it takes us 45 minutes each time we have to go in to clean and polish the core pins, and we were shutting down to do this 3-4 times/shift, or our parts would get out of spec. Worse, we were replacing those pins every month. It was a never-ending cycle with lots of downtime, scrap parts and frustration.”

It was then that Twin City decided to try a new product that its long-time supplier, Progressive Components (Wauconda, Illinois), had introduced: black nitride custom core pins. “Even though we’d been disappointed with premium-coated products before, given how this issue was hurting our productivity, I felt I had nothing to lose in trying them out,” Sheridan adds.

“I started working in die casting when I was 16 years old,” recalls Ken Rumore, Progressive’s R&D manager and the person who developed the company’s hybrid black nitride process. “Years ago, people told me that if I could ever conquer the soldering problem, I’d change the industry. Almost five years ago, we set out to create a product that would solve major issues that die casters face every day. Our made-to-order black nitride core pins are products that do just that.” 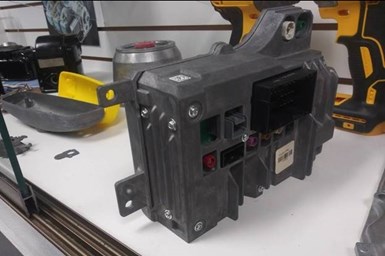 A two-piece die-cast magnesium frame assembly (above), which holds the center display panel in passenger vehicles, proved challenging to produce at Twin City’s Monticello plant. Steel core pins, used to produce holes in the cast part to eliminate post-cast drilling, were being attacked by the molten magnesium in a process called die soldering. Press operators had to stop the process 3-4 times/shift to clean and polish the pins to reduce degradation and replace pins every month.

“Ken likes to tell people that this product’s ‘not your grandmother’s nitride,’” laughs Patrick Fleming, Progressive Components regional sales manager. “I agree, and so do our customers. For a long time, we’ve felt that die casting was an underserved market. We love to get in there and see where everyone’s pains and issues lie, and then develop new products to help solve their problems.”

“Although it didn’t completely eliminate the soldering problem, these pins definitely last longer and give us more uptime,” Sheridan adds. “Twin City has been running the display-frame die with Progressive’s black-nitride custom core pins for over a year.

There are multiple nitriding processes, many of which are proprietary and used to improve the performance of steel parts in industries as diverse as automotive/racing, locomotives, defense/aerospace, firearms, oil & gas, and, of course, molds and dies. Technically, it’s not a coating at all, but rather a diffusion process where carbon and nitrogen are forced into the surface of steel 76-127 microns. This significantly increases the metal’s hardness (to 66-70 HRC) and surface lubricity, boosting both wear and corrosion resistance and significantly improving part life. In the case of die and mold components that, in turn, helps reduce downtime, maintenance and part rejects, so casters and molders are more productive and profitable.

For injection molders, black nitride components can facilitate greaseless molding—a big benefit in cleanroom/medical or packaging applications. And since it’s not a surface treatment, dependent on good adhesion between coating and substrate that can wear off, black nitride components can significantly improve component life under the harsh heat and corrosion of casting or even when molding caustic, abrasive or high-temperature plastics.

Not Eliminated, but Greatly Improved

When Sheridan placed his first order for black nitride custom core pins from Progressive, he was surprised at how quickly they arrived. “The pins we were using in the display-frame die weren’t off-the-shelf products. They were custom pins with a lot of shape and detail to them. They had custom diameter, radii and shoulder length. They weren’t straight core pins. Given that the black nitride process takes extra time, we were very impressed that Patrick got them to us in just four days.” Since that first use, he adds that Twin City’s engineering department has worked with Progressive Components to change the black nitride core pin details to help further increase longevity. Sheridan says that the new pins held up much longer and took a lot of punishment, which meant less downtime and real cost savings.

“The most notable improvements are reductions in scrap, downtime, maintenance and the cost of quality as well as stability of cycle and shot size,” Rumore adds. “Additionally, casters no longer have to maintain huge drawers of spare pins, seriously reducing costs and management tasks long term. When you’re changing pins every few days, the costs are going to be insane.”

When Progressive first started evaluating these products, they asked customers to try them with their dirtiest, nastiest, problem child—the program that kept them awake at night. “We had one customer tell us that every time he had to pull a die to replace components, it could cost him $5,000 or more in lost productivity depending on die complexity,” Fleming says. “We had another customer who had completely given up on core pins and had gone back to drilling holes as a secondary operation, costing a fortune. After trying our black nitride core pins, his situation was so improved that the company returned to casting holes again. And we had one caster who was having to change pins every 1-2 days. Last time we checked, he’d been running for 90 days straight and hadn’t had to replace his black nitride core pins.”

“Although it didn’t completely eliminate the soldering problem, these pins definitely last longer and give us more uptime,” Sheridan adds. “Twin City has been running the display-frame die with Progressive’s black nitride custom core pins for over a year.