Auburn processes production orders from prototypes to thousands of parts, such as this television casing. To be able to trim out these large thermoformed parts, the company has been using Mastercam software since 1993.

Tough-to-produce plastic parts used to be something extremely difficult for programmer David Eno at Auburn Vacuum Forming Co. (Auburn, NY); however, he found a way to make them more easily, while giving them a comfort zone for any part that comes through their doors.

Auburn is a manufacturer of vacuum or pressure-formed plastic parts for mid-size and larger companies serving the general industrial, medical and transportation markets. These custom-made parts normally involve secondary CNC machining and further value-added assembly work. Their 40-person staff is supported in these efforts with in-house services including CAD, pattern, mold and fixture construction. 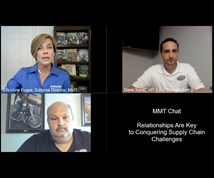 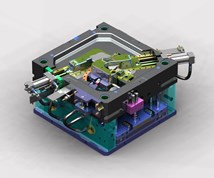 Auburn’s pattern shop has the capability to produce tools using traditional pattern making equipment coupled with CAD/CAM. Fixtures and CNC programs are developed in-house to ensure tight control over the manufacturing process. Three and five-axis CNC machines are used extensively for consistent and productive part processing. They are able to import and export files, to rapidly develop CNC toolpaths, and to assist customers with part design and development.

A problem the company had to solve was how to trim small or large parts from thermoformed-plastic sheets quickly and accurately, and produce molded parts productively. Molds and plastic formed parts could be as small as two inches by three inches or up to 10 feet in length. An average molded thermoformed part is five-feet square using up to one-half-inch-thick plastic sheet.

Auburn processes production orders from those that are small (less than 50 pieces) to those in the thousands of parts, and also designs and produces prototypes. To be able to trim out these large thermoformed parts, the company has been using Mastercam CAD/CAM software from CNC Software, Inc. (Tolland, CT) since 1993. Eno has been using Mastercam since 1987. Today they are using Version 9.1 to generate toolpaths and surfaces for their CNC trimming machines and metal cutting milling machines.

Eno remarks, “We’re using Mastercam to generate toolpaths for aluminum molds and to trim the parts that they produce. We have the ability to take our customers’ supplied geometry and import it into Mastercam. Features such as openings, holes, square holes and trimmed edges are all handled by the five-axis trimming station with code and toolpaths generated by Mastercam.”

Surfacing with Mastercam is “very easy,” remarks Eno. “You can easily control the router position, the wrist-arm position with a vector and lock it into position without generating a lot of unnecessary code. Mastercam is intuitive and very reliable. Once you generate a toolpath and you see it on the screen, you know that it’s an accurate representation of what your CNC machine is going to do when the CNC program is executed.”

Eno adds, “On aver-age, our programs take us about an hour to do, and at times less than 10 minutes. However, we couldn’t do it on the machine’s CNC controller. It would be very difficult to just about impossible to program our parts that way. Also with Mastercam, it allows us to do a job more than one way. It gives us a great comfort level with whatever part comes through the door to produce, because we know that Mastercam can handle it.”

Auburn has been chosen to evaluate the Mastercam solid modeling and machining software. Upgraded editions are furnished to them for evaluation prior to general release. Having access to the latest offerings gives the company a competitive edge in bringing plastic parts to the marketplace in the most efficient manner.