Gardner Business Media launches the first edition of FITMA 2021, the International Technology and Manufacturing Show (FITMA), aimed at the Latin American market, will have its first edition at the Centro Citibanamex in Mexico City March 9-11, 2021. 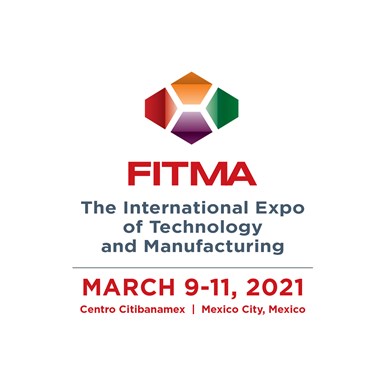 FITMA will be the most important biennial technology and manufacturing exhibition for the Latin American region, bringing together leading manufacturers, international OEMs and suppliers of machinery, equipment and services in the metalworking sector. The world-class exhibition will also present a unique international conference program. FITMA has the support of more than 90 years of international experience in marketing, research, editorial content and event production in the manufacturing sector. FITMA is presented by Modern Machine Shop México and its founding company Gardner Business Media.

With an expanding population of nearly 640 million, a growing middle class and a driving technical workforce, Latin America is a growing region and will be demanding technology and services more and more. Supported by continued foreign investment in the region—about $147 billion in 2018 and $4 billion of total machine tool consumption by Latin America's top 5 countries—the economic outlook is very positive. FITMA represents a unique opportunity for OEMs and state-of-the-art machinery, equipment, technology and service suppliers to finally find an unprecedented context to meet, network and train.

“Mexico and the region needed an exhibition of machine tools and manufacturing that met the expectations of the country and the whole of Latin America. In the last 20 years, various events have been held in the sector, but they have been characterized by focusing on very specific regions. The industry needed an event dedicated to the metalworking and manufacturing sector that reflected the importance, size and real needs of Mexico and Latin America. That’s why Gardner Business Media and its flagship magazine, Modern Machine Shop Mexico, focused on this project to conduct an exhibition of machine tools and manufacturing technology in the style of the world's most recognized shows, such as IMTS and EMO Hanover,” says Eduardo Tovar, Editorial Director of Modern Machine Shop Mexico.

Mexico has established itself in Latin America as the production leader in various industries, such as automotive. Mexico is the seventh global producer of light vehicles, the fifth world producer of heavy vehicles, the first producer of vehicles in Latin America, the fourth global light vehicle exporter and the second global heavy vehicle exporter. Additionally, 25 of the world's leading vehicle manufacturers have manufacturing plants in Mexico.

The Mexican aerospace industry is also very prominent. In 2018, Mexican exports from the aerospace industry reached a value of close to $8.5 billion, 12% more than in 2017 and representing a 20% surplus on the trade balance. Similarly, at the end of 2018, around 60,000 jobs were recorded. In this regard, the Mexican Aerospace Industry Federation’s forecast for 2020 is that Mexico will rank among the top 10 countries in the industry internationally, with exports of more than $12 billion, more than 110,000 jobs and 22% surplus on trade balance.

When it comes to the manufacture of electronic products, Mexico has a track record of more than 30 years as an exporter. Mexico’s production in the electronic sector for 2019 reached $80.6 billion, whose main export destinations were the United States, Canada, Colombia, France and the Netherlands. In addition, Mexico is the main exporter of household appliances in Latin America. Production of $9.6 billion and an average growth of 5.5% was achieved in 2018.

The production of medical devices in Mexico is more than $15.2 billion and generates more than 130,000 jobs. Currently, Mexico is the eighth medical device exporter worldwide, the top exporter in Latin America and the main supplier in the United States.

He goes on: “Gardner has been able to establish the necessary ties and connections with state-of-the-art technology companies for many years, and it is precisely them that we work for. We are confident that the platform we deploy with FITMA will become the event that will support the future of business within the region. A single investment covering prospects and clients from all over Latin America every two years, that's what we're visualizing.”

Among the parallel activities that the event will present is the International Conference Program, which will feature high-level presentations by global experts who will be providing their knowledge and success stories on innovative technological solutions for machining processes, metrology, machine setup, data-driven manufacturing, automation, among many other metal part manufacturing topics, as well as trends, experiences and challenges of the Industry. The conferences will be open to all attendees on the FITMA show floor.

Strategically located, Mexico City accommodates direct flights from Central, South and North America, Asia, and Europe, making it the ideal venue for an international event. Gardner Business Media is among the most important publishers in North America’s manufacturing industry, providing unique and relevant information of great interest to the people who run the plants, machine shops and factories of the metalworking and many other sectors. Gardner strives to use all media channels, whether print publications, websites, electronic devices, newsletters, webinars, research or events, to offer its audiences best practices and useful information to explain the technology and help companies to be competitive in today’s challenging world.

FITMA will be the most important biennial technology and manufacturing exhibition for the Latin American region. Organized by Gardner Business Media, in partnership with Modern Machine Shop Mexico.