Simulation evaluates root cause and the impact of wall thickness, gate and cooling modifications.

Figure 1. This lid is 12 inches in diameter and 0.06 of an inch thick. For analysis, it has been broken down into tetrahedral-shaped elements. Figures courtesy of 3D Shapes.

Question: What injection molding issue is caused by part design, mold design and process conditions, and then wreaks havoc on the parts?

Warpage is a symptom of non-uniform shrinkage, but it doesn’t tell you much about the root cause. Without analysis, you must solve these problems based on your experience and experiments at the molding machine. Wouldn’t it be better to look at the actual parameters throughout the part and the molding cycle to see how you can influence the results?

Every molding parameter has some effect on volumetric shrinkage. Even though a single mold shrinkage value is typically used, shrinkage is never uniform, and, surprisingly, this works as well as it does. Non-uniform shrinkage is resisted by the inherent rigidity of the part based on its features and material. A very rigid part may not warp, but will still have molded-in stress.

To make things easier to understand, consider this simple part in Figure 1 (Moldflow works just as well with the most complex part design).

Imagine if you squeeze the part around the outside and try to reduce the diameter. The middle will tend to dome upward. If the plastic shrinks more on the outside diameter, then that is precisely what happens. That volumetric shrinkage difference would be a typical result for a part packed with a single pressure until the part has reached the ejection temperature. The volumetric shrinkage would have larger values at the outside diameter and smaller values near the gate. The packing is not uniform.

Since we can measure a myriad of molding parameters, including temperature, pressure and volumetric shrinkage throughout the cycle, it is equivalent to having thousands of sensors and probes in the tool.

With simulation, the overall volume that makes up a part is broken down into smaller, tetrahedral volumes (finite element mesh) used to solve these problems. Since we can measure a myriad of molding parameters, including temperature, pressure and volumetric shrinkage throughout the cycle, it is equivalent to having thousands of sensors and probes in the tool.

Figure 2 shows the average volumetric shrinkage at ejection, which ranges from 2.4% to 11.8%. The values also change from the outside wall at each location to the center. Values are not even uniform for a single element. This is the case for all injection-molded parts. Again, it’s impressive a single mold shrinkage value works most of the time. 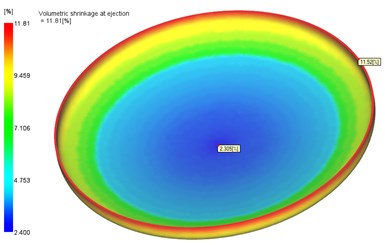 With mold shrinkage, you are answering the question, “On average, how much bigger do you need to build the cavity for the molded part to meet dimensional requirements?” For volumetric shrinkage, you are answering the question, “How evenly and well packed is the part?” If you do a good job attending to volumetric shrinkage and pick a reasonable average material shrinkage value, then the part will meet dimensional requirements. One depends on a little luck, and the other depends on a bit of analysis.

Simulation information will allow you to make informed, timely decisions whether you are designing a part, designing a mold, or developing a process.

The longer plastic cools until it reaches the ejection temperature, the more it shrinks. Thick areas of a part that have high values of volumetric shrinkage may result in dimensional issues and may have sink on the outside walls. With very high shrinkage, sink may effectively occur internally by forming vacuum voids. These are often mistaken for air traps that are due to melt-front advancement.

Even on a uniform-walled part such as this lid, the values will be higher far away from the gate. Gate location, gate style and sizing greatly influence shrinkage as do mold material choices and cooling layout. 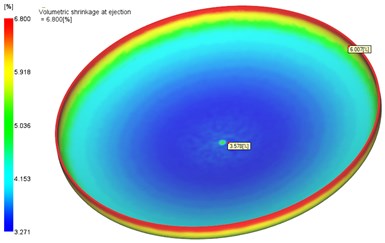 Figure 3. Volumetric shrinkage is significantly impacted when packing pressure is changed from a single value held over a set time to a varying pressure over time.

High shrinkage may severely deform a polypropylene part or live as molded-in stress with an engineering-grade material. Even with similar volumetric shrinkage, a flat plate will warp entirely differently than one with ribs or sidewalls. 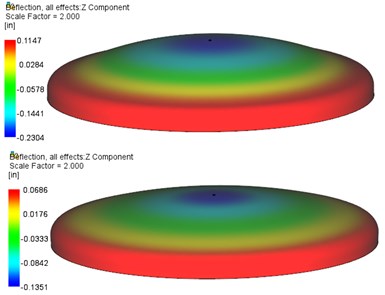 Figure 4. A part warps less and is closer to the required dimensions by attaining more uniform shrinkage.

There are so many factors affecting shrinkage that without plastics analysis, it is not possible to estimate how they all interact to affect critical dimensions. While you may see warpage, sink, voids, dimensional issues on molded parts without analysis, these are only the symptoms, and you are left to experimentation.

Analysis allows you to evaluate the root cause effects of all of these factors and the effect of modifying wall thicknesses, moving gates and improving cooling. This information will allow you to make informed, timely decisions whether you are designing a part, designing a mold or developing a process.