Each part of the business (molding, moldmaking, steel stamping/automation equipment) typically contributes roughly a third of annual revenue. Reed City also has embraced 3D printing/additive manufacturing and owns three polymer printers for prototyping parts rather than molding them in soft tooling. The 62-year-old company owns two buildings, each 80,000 square feet/7,432 square meters, and employs 124 team members—up from 96 in 2019, thanks to additional work brought in during the pandemic and growth in other parts of the business.

Reed City’s molding and moldmaking customers hail from the automotive, consumer products, medical device and pharmaceutical industries, so it’s no surprise the company is ISO-14001:2015- and ISO-9001:2015-certified. It’s also a service-disabled, veteran-owned small business (SDVOSB). Although it typically produces about 100 molds per year, in 2020 that side of the business got a boost and the company turned out 124 new tools. Most are in steel, although the company does occasionally produce a developmental or low-volume tool in aluminum. These are typically for straight injection, 2K/overmolding and gas-assist, and represent a broad range of sizes and complexity. 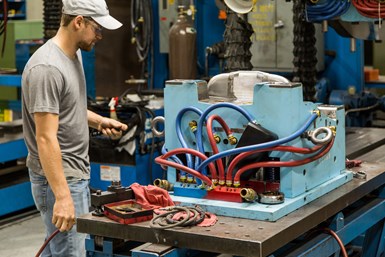 In 2015, Reed City tried plate from a new company, Steel 21 in Cedar Springs, Michigan, that was dedicated to producing high-quality steel backing plate using a new and proprietary process called 21 Micro Milling. So pleased was the Reed City team with the much higher and more consistent quality of the micro-milled plate that it has since switched to Steel 21 for nearly all its plate. Photo Credit: Reed City Group.

“We never make the same mold twice, but the one thing most of our tools have in common is that we make an awful lot of difficult tools,” chuckles Marty Mund, Reed City director of operations. Also, interestingly, given that the company has its own custom molding operation, most of the tools Reed City produces are not for its own use but rather are used by other moldmakers. On the molding side, the company’s own presses range in size from 28 to 725 tons/tonnes. Although Reed City’s tools are typically produced in the 500 to 1,500 tons/tonnes range, when needed, it can produce tools to fit platens as big as 50 x 80 inches/127 x 203 centimeters and presses up to 3,000 tons/tonnes.

Results: Concerns and bottlenecks eliminated; plate quality was so good that Reed City now buys almost all its plate from Steel 21.

Moldmakers face a variety of challenges and frustrations getting quality tools produced quickly and profitably. A big challenge Reed City currently faces is availability of materials. “We’re fighting shortages of steel and some components that are critical to our operations—likely due to supply-chain disruptions caused by the pandemic,” Mund says.

A challenge that the company used to face was purchasing quality steel backing plate that met Reed City’s specs for flatness and average surface roughness (Ra). Because no two tools the company builds are the same, and each tool uses different sizes, thicknesses and numbers of backing plates on core and cavity sides of the molds based on part design and size, polymer being shot, and press pressures and temperatures, there is little opportunity to preorder and stock product. 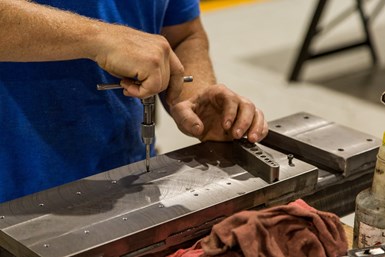 Plate flatness is a very important for producing a quality tool that can be spotted together properly. When the product Reed City received wasn’t consistently flat across its entire surface, team members had to rework the plates, which added cost and time to tool production, or risk of missing delivery commitments. Since there are so many factors involved in determining the size, thickness and number of plates needed for each tool, and since no two tools Reed City makes are the same, it really didn’t make economic sense to try and pre-stock plate. Photo Credit: Reed City Group.

“Plate flatness is a huge factor in producing a quality tool,” explains Mund. “When we used to purchase plate that was produced using Blanchard grinding, we quite often had to rework it ourselves because otherwise we couldn’t get the mold spotted together properly. Because the plates we were receiving just weren’t consistently flat across the entire surface, we ended up having to machine them ourselves. That not only added cost but, worse, it took additional time, which could impact our delivery commitments if we didn’t manage things very carefully.”

A better option became available to Reed City in 2015 when a new company opened in Western Michigan that was dedicated to producing high-quality steel backing plate produced using a new and proprietary process. “One of my designers had seen a tool made with plates that had been cut, not ground,” recalls Mund. “He tracked down the name of the company and urged us to give them a try.” The rest, as they say, is history.

“We never make the same mold twice, but the one thing most of our tools have in common is that we make an awful lot of difficult tools.”

Plate Production for the 21st Century

Steel 21 of Cedar Springs, Michigan, was founded in 2015 by second-generation steel plate manufacturer Kimm Slater, who had previously founded and run Steel Craft Technologies in Belmont, Michigan, and earlier Maco Steel Inc., also in Belmont, a company his father had founded. With over three decades of experience in steel plate fabrication and machining, Slater—who describes himself as a failed retiree—had spent a lot of time thinking about what it would take to be able to produce dimensionally precise and really flat steel plate. The unique process he developed—which Slater calls 21 Micro Milling—received patent protection in 2019.

Compared to Blanchard grinding, the 143-year-old process benchmark, Steel 21 is able to produce ASTM-certified A36 and 4140 steel plate in half the time, yet the material’s finish is five-times smoother (with an Ra value ≤21 versus 100 for rotary grinding). Additionally, that plate also is three-times flatter and more parallel. On a 20-foot/6.1-meter sheet, 21 Micro Milling holds flatness tolerances within 0.002 inches/0.05 millimeters—an order of magnitude better than the 0.020 inches/0.51 millimeters typically seen for a comparably sized rotary-ground plate.

Versus Blanchard grinding, the 21 Micro Milling process produces ASTM-certified A36 and 4140 steel plate in half the time, yet that plate is three-times flatter and more parallel, and it has a finish that’s five-times smoother. Every plate is measured in-process, so it’s always delivered to spec. And, remarkably, Steel 21 doesn’t charge a premium for a better product. Photo Credit: Steel 21.

Since the micro-milling process runs without coolant, it eliminates swarf and 100% of the chips can be and are recycled. Because the process doesn’t introduce friction heat into steel, plates are only flipped once after initial roughing and final finishing, unlike Blanchard grinding, which can necessitate flipping plates three to five times to dissipate heat. This, again, saves time, money and is safer for workers. And owing to the clever self-leveling, work-holding system Slater developed, plates are consistently much flatter, because warp is not pulled out of the steel during grinding, only to return after pressure is released. Also, since plates are shelf-shimmed across their entire length and width, the tendency of un-shimmed plates to bow in the center under machining pressures is eliminated.

Perhaps even more remarkably, Steel 21 produces plate twice as fast, 100% to spec (with each plate measured in process), and yet the company doesn’t charge a premium for a superior product. “The steel business is very competitive,” explains Slater. “We do a lot of work in automotive, so we’re typically dealing with lots of purchasing agents who are solely focused on price and don’t look at overall cost, which is pushed down into the shop when they receive plate that isn’t really flat. They just don’t realize they could have gotten flatter plate while saving both time and money. Ironically, when we started out, our goal was to produce a more competitive product, so we focused on ways to produce plate faster. It just so happens that we ended up producing a better product too.”

“Plate flatness is a huge factor in producing a quality tool.”

The company’s standard hot-rolled steel plate is 96 x 240 inches/244 x 610 centimeters, in thicknesses ranging from 0.50-12.0 inches/13-305 millimeters in 0.25-inch/6.4-millimeter increments, although custom sizes are available. Plates are flame cut. Those that are ≤2.0 inches/26 millimeters thick are cut with plasma, which is three-times faster and twice as accurate as oxy-fuel, which doesn’t have the thickness limitations of plasma. Although Steel 21 doesn’t do anything special to its steel before processing it, and can produce plate using other grades of steel, Slater says, “We’re very picky with our chemistry and primarily will only work with certified materials, as otherwise we find there can be a lot of stresses in uncertified materials.” The company’s plate is used for both plastic injection and compression molds as well as stamping and die-cast dies. Automation is a growing market—especially for robot bases. Not only does Steel 21 produce dimensionally accurate plate but, as a further service to tool builders, it will drill and tap holes, put in pockets and trim the plates as well.

From that first use of Steel 21 plate, Reed City found the product was exactly what they’d been looking for and that it eliminated a bottleneck in tool production. “We’ve been using them for 5-6 years now and haven’t had any issues at all. When we order 2-inch-(50-millimeter)-thick plate, it comes in 2-inches thick. With Blanchard grinding, it’s all over the place, unless we pay a premium and, even then, there’s a hump in the middle. We buy almost all our plate from Steel 21 now, and while I don’t know how much we’ve ordered over that time, it’s a huge number,” explains Mund. 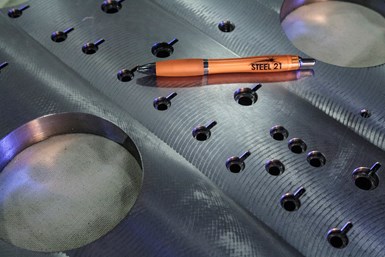 Steel 21’s standard hot-rolled steel plate is 96 x 240 inches/244 x 610 centimeters, in thicknesses ranging from 0.50-12.0 inches/13-305 millimeters in 0.25-inch/6.4-millimeter increments, although custom sizes are available. Plates are flame cut either by plasma or oxy-fuel. As a further service to customers, Steel 21 will drill and tap holes, put in pockets and trim plates as well. Photo Credit: Steel 21.

Reed City was so pleased with the quality and turnaround time on the plate that they began having Steel 21 produce rails for them, as well as rough out guide pins holes and more. “We’ve found it’s very economical to bring it in and not have to visit those holes,” adds Mund. “Their tolerances are good enough. And our designer keeps saying that they ‘speak our language’ and know what we want and delivery it every time. They’ve taken all the hassle out of buying plate. Their customer service is really good.” Like other moldmakers, Reed City agrees that 21 Micro Milled plate saves 10-15% of the time they previously spent producing a completed tool.