Michigan-based moldmaker Paragon D&E is known for the quality and size of the tools it builds and its quick turnaround. Four years ago, having just upgraded CNC, finish-milling and boring-mill machines, company management was looking for new opportunities to make its manufacturing more efficient. Gundrilling was identified as the next target, since Paragon not only drills its own molds but does contract drilling for local tool shops. Images courtesy of Paragon D&E.

Founded in 1942, Paragon D&E of Grand Rapids, Michigan, is a family-owned and operated moldmaker known for the precision and size of the tools it builds and its quick turnaround. With customers hailing from automotive, commercial truck, agricultural equipment, aerospace/defense, oil/gas, marine, wind energy, large appliance, packaging and the nuclear industry, Paragon designs and builds molds for the injection, compression, vacuum bag and resin-transfer molding (RTM) processes.

The company also offers mold tryout services, fixture design and production, mold repair and maintenance, contract machining of metals and composites and low-volume production of both plastic injection and composite compression molded parts. Given Paragon’s customer base, it’s not surprising the company is ISO 9001:2015and AS 9100D certified, NQA-1 compliant and CCR and ITAR registered. It employs just under 200 team members—at least a third of which are highly experienced moldmakers. Mold design and manufacturing, as well as mold tryout and low-volume part production are housed in a single 195,000-square-foot/18,116-square-meter facility. The company also operates a mold-repair facility in Brownsville, Texas near the Mexican border to support customers in multiple industries.

Problem: Moldmaker known for the speed, quality, & size of its tools sought additional efficiencies in the gundrilling area of its manufacturing process.

About four years ago, business was booming and company management was busy upgrading equipment and looking for opportunities to make manufacturing more efficient. “From a sales perspective, we wanted to be more cost-competitive,” recalls Greg Eidenberger, Paragon vice-president of sales. “We’d already upgraded all our CNC, finish-milling and boring-mill machines, but one area where we needed more efficiency to drive down cost and improve quality was in deep-hole drilling. At the time, we had four dedicated gundrills because we not only used them to make our own tools, but we also drilled for other tool shops in the area.”

Gundrilling can be a slow and involved machining step—particularly given the size tools Paragon builds (typically nothing smaller than will fit in a 500-ton press). It’s also a machining technology that, until recently, hadn’t seen much innovation in decades.

“We’ve had a long relationship with Performance Machinery (now Merrifield Machinery Solutions, Sterling Heights, Michigan) and we keep them updated on what we’re doing and what we need,” explains Eidenberger. “When we discussed gundrills, they had just started repping  CHETO, so they invited us to their showroom where we looked at different machines. Once we became aware of all the new technology CHETO offered, we saw that as an opportunity. We were immediately captivated by the IXN product line, because it had all the capabilities we were looking for and then some.” 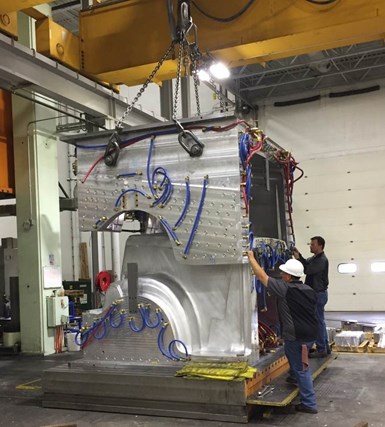 Paragon’s customer base hails from automotive, commercial truck, agricultural equipment, aerospace/defense, oil/gas, marine, wind energy, large appliance, packaging and the nuclear industries, so the molds it makes tend to be large and require a lot of deep-hole drilling, a process that historically has been slow and involved.

CHETO Corp. (short for Create High Efficiency Technology Obligations) of Loureiro Oaz, Portugal, was founded in the late 1990s by owners with over 30 years of molding and moldmaking experience and a goal of developing multitasking machining centers. The company began by offering milling with deep-hole drilling, and then added radial drilling, tapping and boring to the functionality of its machining centers.

“Deep-hole drilling is a critical step in moldmaking, yet it’s long been a big gap on everybody’s Gant chart because it’s traditionally an area with many problems and few solutions,” explains CHETO CEO Carlos Teixeira. “Usually, everyone focuses their investments on finishing operations like milling, but 50% of the production process can be drilling—especially on really big molds. You invest in new CNC machines to speed up your process, but then you’re forced to slow down for drilling. It’s an old, dirty process with no covers that takes a long time. Fortunately, we got into the market at a very nice moment when things were starting to change.”

CHETO Corp. produces a range of multifunction machining centers that combine milling, deep-hole and radial drilling, tapping and boring technology. With both a 5-position radial drilling arm and a rotary table, the company’s products can machine in 6, 7 or even 8 axes, depending on the configuration. CHETO also installs automated tool changers on its gundrills. Not only does this reduce setups and tool breakage and increase unattended run times, but it helps make a process that is historically slow, dirty and can represent up to 50% of a mold’s production process much faster, cleaner and more efficiently. Photo Credit: CHETO Corp.

One of the most interesting challenges CHETO has overcome is the traditional instability of long drills, which limits the depth that can be drilled—particularly for small-diameter holes. The company’s systems are known for the steadiness and balance of their drills, which can go as deep as 2.5 meters/98 inches. Also, CHETO installs ATCs on its gundrills. This becomes a major selling point for a process that already is known for being slow and involved because as drills start to wear, operators must stop machines, unload tools, replace them by hand and then restart operations. With CHETO ATC-equipped gun drills, there are two types of tool changers—one for standard tools up to 600 millimeters/24 inches and one for gundrills up to 1.9 meters/75 inches. Also, the system monitors tool wear and adjusts feeds according to tool lifetime and workpiece hardness, helping reduce tool breakage and increase uptime without operator intervention. 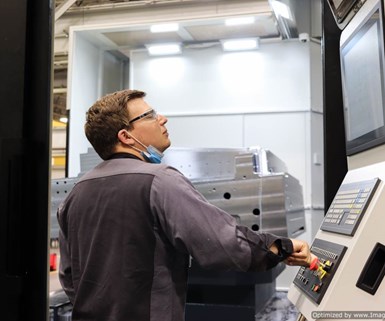 Paragon ordered two CHETO IXN 3000 7-axis milling machines with gun-drill ATCs, which are equipped to make up to 3-meter/9.8-foot cuts in the X-axis and can hold up to 30-ton workpieces. Installation was strategically staggered to allow time for excavation and machine shakedown, build operator comfort, remove other machines from the building, and bring each new machine online so as not to disrupt production.

“Our machines use very little energy as all our motors are direct-drive or have inverters for high efficiency. Also, we mount our gear box on the spindle to provide more power to cut big diameters, and these are fully enclosed systems, which keeps things neater and cleaner. Another big advantage is that they use an emulsion coolant system that’s mostly water with only a little oil—maybe 8 to 10% . Not only is this better for the shop, since it’s very clean and efficient, but it reduces odors as well as fire plus slip and fall risks, and it’s much better for the environment. Additionally, it reduces the need to flush workpieces after gundrilling to get oil out of holes before moving to another operation,” adds Teixeira.

Paragon ordered two IXN 3000 7-axis machines with gundrill ATCs. Since the owner wanted to shorten payback on the investment by ensuring his operators were as efficient and well-trained as possible before the machines arrived, they were sent to Portugal to begin training even as the first machine was built. That was followed by more training locally once the machine was installed and commissioning began. Paragon’s first CHETO was installed in the first quarter of 2019 and its second was installed in the fourth quarter of that year.

“We pretty much ordered all the bells and whistles on these CHETOs, as our intent moving forward was not only to increase our capacity but also to be able to do more lights-out machining,” notes Eidenberger. “Also, we staggered delivery of the machines so we’d have time to have the first one installed, work the bugs out and ensure our operators were comfortable with it before the second one arrived. That also gave us time to pull other machines out of the building as we worked these machines in. We wanted to be very strategic in how we brought these new machines online so they wouldn’t disrupt production.”

One of the features that Paragon has found to be most useful is the CHETO Wise tool-management software that’s part of the machine-control system. “Using this system gives our operators great confidence that the machine is constantly monitoring deep-hole drilling and optimizing feed rates and other conditions to avoid wear and damage,” remarks Eidenberger. “This extra measure of safety means we can run our CHETO machines for many hours at a time in a true ‘lights-out’ operation.”

CHETO’s multifunction machining centers are very energy efficient, featuring gear boxes mounted to spindles to increase power when cutting larger-diameter features. The systems are fully enclosed, which helps keep shops cleaner, and they use emulsion-based coolants, which are mostly water with only a little oil. Such coolants reduce odors as well as fire plus slip and fall risks, they’re much better for the environment and they reduce the need to flush workpieces after gun drilling to get oil out of holes before moving to another operation. Photo Credit: CHETO Corp.

The two new CHETOs enabled Paragon to remove three of its dedicated gundrill machines while handling the same volume of work in a shorter amount of time using a smaller footprint and less energy. “These machines have given us better capabilities,” adds Eidenberger. “With 7 axes, they give us a lot more flexibility in how we put cooling and steam lines into our molds. And the five gun-drills ATCs on each machine have really impressed us. They’ve been a big part of the efficiency we’ve gained, since we have fewer setups and can run unattended for longer. Also, by switching from oil- to water-based coolant in a fully enclosed system, we’ve greatly increased our shop’s safety factor by reducing potential slips and falls.”

“In the end, we’re really glad about the decision we made to buy the CHETOs,” concludes Eidenberger. “Everything has worked out really well and we’re very happy with the direction they’ve allowed us to take.”