In collaboration with several companies, Arburg applied its injection molding know-how to develop a multifunctional face mask made from LSR and PP in 41 days.
#covid-19

The complete Arburg face mask consists of the LSR mask, the holder and the filter (from right to left): all components were injection-moulded on Allrounders at Arburg in Lossburg. All photo credit: Arburg

Injection mold company Arburg (Loßburg, Germany and Rocky Hill, Connecticut) reports that it has been very active in the fight against coronavirus since the beginning of the pandemic. In May for example, the company emphasized a collaboration with other companies to develop a multifunctional face mask made from LSR (liquid silicone rubber) and PP (polypropylene). According to Arburg, the mask was made ready for series production in only 41 days. However, the next step was to design and manufacture a supplementary disposable filter that could be easily attached to the mask opening.

"It was important to us not only to develop the mask as a product for everyday use, but to prioritize personal protection with the additional filter," says Gerhard Böhm, Arburg managing director of Sales. A high level of comfort while wearing, steriliability and the ability to use it multiple times were further requirements for its development.

The mask itself consists of a soft LSR component, which is put over the nose and mouth, and a firm PP holder with eyelets to attach the elastic bands. The LSR masks were injected on an electric Allrounder 570 A with a clamping force of 2,000 kilonewtons and a four-cavity mold, then removed by a Multilift V robotic system. The associated PP holder was produced on an electric Allrounder 520 E Golden Electric with a clamping force of 1,500 kilonewtons and a two-cavity mold, and injection molded parts were removed by a Multilift Select robotic system.

To prevent infection, says Arburg, the mask opening is closed with a cover so that air can escape downwards. A disposable filter can be placed on the opening to protect the wearer and also people in the surrounding area.

The addition of the filter was developed in collaboration with Karl Küfner,  a company specializing in the production of filters, which is said to have been using Arburg machines in injection molding production for decades. 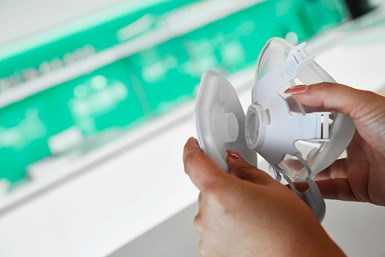 The filter can be easily attached to the Arburg mask, which protects the wearer and those in the surrounding area.

Project Manager Manuel Frick, the designer of the face mask, explains the production of the mask filter: "We used an Allrounder 470 H with a clamping force of 1,000 kilonewtons and a four-cavity mold to produce the thin-walled filter housings made of PP. As this hybrid high-performance machine is designed for high-speed applications, we can produce the parts in a cycle time of around 5.5 seconds." This makes it possible to very efficiently produce around 2,500 housings per hour, which were then ultrasonically welded to a high-performance fleece to form the finished filter. 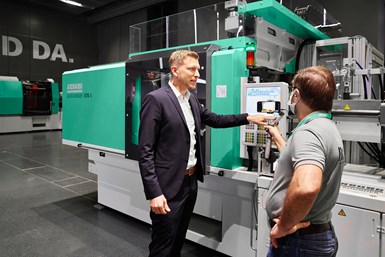 A highlight of the "Arburg Summit: Medical 2020": the production of the LSR mask on an electric Allrounder 570 A, presented live by Manuel Frick.

As to whether Arburg will be producing masks for the market regularly as an injection molding company, Arburg’s Gerhard Böhm says no. "We do not want to earn money with the production of masks, but rather wanted to show how such high-quality products can be developed quickly and manufactured economically in series production." This project reportedly enabled Arburg both to demonstrate its expertise in the turnkey sector and to gain interesting experience, from the design of the mask, to prototype production with the Freeformer, and the series production with automated Allrounders. "Our customers can now also benefit fully from this. We have already received inquiries from companies who would like to start producing face masks with turnkey systems like this," he adds.