Challenges to Five-Axis Machining for Moldmaking

Multi-axis milling machines and CAM software for performing five-axis simultaneous machin-ing have existed for many years, and the combination of the two have been used in markets such as aerospace and fluid flow (impellors and propellers) for some time now; however, the uses and market penetration of simultaneous five-axis machining for moldmaking is still in the stage classically referred to as early adopters, with a minority of moldmaking shops using five-axis technology. 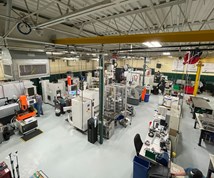 To utilize a shorter tool the spindle is tilted with an inclined view such that a specific region of the part can be machined with the shorter tool. The process of setting a constant angle to the spindle is generally known as 3+2-axis machining. Complex parts may require dozens of inclined views to fully cover the whole part. The resulting toolpaths must overlap—leading to increased machining time.

Additionally it can be difficult to perfectly blend all of the inclined views, resulting in increased hand polishing. At the same time the number of lead-in and out movements increases dramatically, which often results in surface quality problems and more tool movements.

Finally, programming in this way can be quite interactive and time consuming for the user and often the sum of all views does not cover the whole geometry. Figure 2 shows four views for the part yet there is still a region not covered in the center of the part. This region would still need an additional inclined view.

Repeatability
Repeatability is the ability for the five-axis milling machine to return to the same point and vector consistently. Repeatability of a five-axis machine requires accuracy of not just the axial positions, but also the angular values.

Angular Velocity
Angular velocity can be considered in degrees of rotation per second, or you may also simply consider it in revolutions per minute (rpm). This is a function of how fast the tool can rotate in relation to the part, the faster the value, the faster the machine can cut. Many older five-axis machines have slow angular movements, which is counterproductive to high-performance machining.

Angular velocity also is important specifically to machining molds. Many five-axis milling machines have a c-axis, which by default rotates around the z-axis. To mill a deep part with a short tool, it is often necessary to incline the tool via the a/b axis and rotate the c-axis to cut around the part. RPM performance of the c-axis is critical to success in this instance.

Angular Limitations
Angular limitations are physical limits to the amount of rotation allowed by the milling machine; these are based on the particular machines design. If it is necessary to incline the tool 50 degrees to utilize the shortest tool or cut an undercut, and you are limited to 30 degrees of rotation, you may not be able to finish everything in that setup.

Angular limitations are very important when considering the c-axis. Many five-axis milling machines have an unlimited amount of c-axis angular movement. However, there are many that are limited in their rotational travel.

For example, a particular mill may only be able to perform +360 and -360 degrees of rotation. Imagine using an inclined angle for the tool and machining down a steep wall, going around and around the part. The majority of the movement in this instance is being handled by the c-axis in a continuous motion. If one has a limited c-axis, it will require the machine to “unwind” at regular intervals to machine the complete part.

Work Environment
Regarding work environment, while you may be familiar with this in a three-axis sense, you also must consider it in a five-axis sense. Does the actual work envelop get smaller as the part or spindle rotates? Using one of your common milling tools installed in the spindle, measure the work envelop with the tool vertical, as well as with the tool inclined to the machine's maximum value.

Many five-axis controllers contain logic to know exactly where the tool center point is in relation to the part, no matter how many rotations have occurred, while it is in motion. This functionality is often referred to as rotational tool center point (RTCP). Many users find that using advanced RTCP functions makes the implementation of five-axis easier.

With five-axis machining, the problems of 3+2-axis machining are not removed; they have been shifted from the programmer to the CAM system. In order to use short tools on the entire part, collision control becomes the most important consideration. It is simply not enough for the CAM system to find collisions between the part and the tool and holder, but it must automatically avoid the collisions, so that the CAM programmer does not have to manually modify the inclination angle of perhaps tens of thousands of data points, or more.

Unlike five-axis functions for specific parts like turbine blades, airfoils and impellors, the five-axis functions for a moldmaker are different. Moldmakers do not necessarily need to cut “normal” to all of the faces in the CAD file, they need simply to rotate the inclination angle just enough to automatically avoid collisions between the tool, holder and the part.

When evaluating CAM software for machining molds, especially deep molds there are many things to consider:

One novel approach which provides flexibility is a module inside automatic toolpath generation software for surface or solid models in mold, die and tooling businesses. Simply put, the module automatically converts a three-axis cutter path to five-axis, rotating the tool inclination angle enough to avoid collisions. This allows for great flexibility, because all three-axis finish cutter path strategies are then available for five-axis use.

Reliability
Reliability of the five-axis cutter paths is critically important. With the addition of the two rotation motions in five-axis the chance for collisions greatly increases, thus the collision checking and avoidance must be reliable, or else suffer damage to expensive equipment.

Ease of Use
Ease of use and five-axis programming were once thought to be mutually exclusive. Traditionally, five-axis programming was considered difficult, time-consuming and extremely interactive. That paradigm must change in order to remain competitive. Utilizing a program such as automatic toolpath generation software for surface or solid models in mold, die and tooling businesses, creating five-axis cutter paths is as simple as creating three-axis cutter paths. It allows shop floor programming in five-axis for complex deep parts using the CAM software to avoid collisions.

Additionally, many five-axis mill configurations have varying limits on their a/b axis. Many trunnion style machines can rotate in the a axis negative 90 degrees, but allow only 15 degrees positive rotation. For this reason, it makes sense that the CAM software automatically takes this limit into consideration to avoid running into limits in the positive direction.

No Five-Axis Solution Is Possible
Sometimes, no five-axis solution is possible. This occurs when the tool is so short, or perhaps the holder is so large that no matter what inclination angle is tried, a collision will always result. Does the CAM system stop at this point, does it fail to produce a cutter path at all or does it inform you of the problem areas?

Naturally, forcing a lot of trial and error on the user, recalculating entire cutter paths is counterproductive. It is best if the problem areas are highlighted, with the possibility of using a longer tool, smaller toolholder or simply editing out those points.

Figure 4 shows an area with points where no inclination angle produced a safe cutter path. Subsequently the points were automatically removed so that the majority of the part could still be cut with the short tool.