Part one of how to plan for unexpected inherited business ownership.
#casestudy

The company—with its electroless nickel and hard chrome plating services—will have a more secure foundation for future generations with the help of a solid succession plan.

When our father, Steve Bales, passed away suddenly three years ago, we knew little of what awaited us as we ventured into the realm of inherited business ownership. We understood the purpose of the business; we were familiar with the services offered and we knew the employees well—they are almost like family. But Steve was the founder of Bales Mold Service, our fearless leader—we thought he would be there forever. Well, maybe not forever, but it never occurred to us that he would leave us without warning, without first retiring and having the company set up the way he wanted, and without imparting to us his dreams for the future. But he did.

Because our dad was such a strong and driven leader it never occurred to us—or him—that maybe we should have that all too important discussion about the future of the company and what should happen if the unthinkable occurred. We had no succession plan, no blueprint to follow. Hindsight, as they say, is 20/20. We were left to start from scratch, which was difficult. 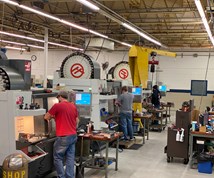 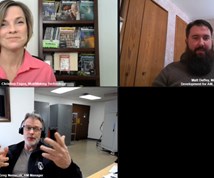 Stacey had been working in the office at Bales, and Sara had helped out when needed, so we didn’t come to a complete stop when our dad died. But there was a period of shock where we just kind of went along; trying to keep doing what we all knew how to do.

Two Heads Versus One
We felt lucky, and grateful, because our customers and employees stuck with us through it all, but there were definitely challenges to overcome, accompanied by lots of legal papers to sign. It was a little confusing and definitely exhausting. In our situation, with everything happening so fast, we felt like there were a lot of questions left unanswered.

Our attorney, one Steve had worked with since the company was founded in 1978, was not really experienced with succession planning and that hindered the process. An attorney should make you feel comfortable and help you understand everything that is happening and why, and even what to expect. That’s what you pay them for, after all. We had the same trouble with our accountant. Each of these individuals were good at some things, but not at handling a situation such as ours. We can’t stress it enough: have a strong pool of resources around you.

Next we had to meet with the bank president and his team. Stacey had met him previously, but despite knowing her it didn’t change the fact that he wanted to know if we were competent enough to run our father’s company now that Steve was gone. He was looking for reassurances, of course, to protect his bank’s investment and we were challenged to prove ourselves, which we did.

It was hard not to take all of it personally and we tried not to.

The next thing we knew, we were business owners and we had to sink or swim. At times it felt as if we were just treading water and we were continually grateful for the solid team of employees that surrounded us, getting the job done for our customers every day.

Three years later, as we begin looking to grow the company again, one of the major challenges we are facing is that the one lone decision-maker and driving force is no longer there. We are now two sisters trying to come together and make decisions about things that will move the company forward. Two people coming together as one has not been as easy as two people following one. Maybe it’s worse because we’re family, but it all adds up to management of this company being differently structured now.

Steve was a typical entrepreneur. He was very hands-on and most of his plans for the future of Bales Mold Service were kept in his mind. While he was very open with some details and plans, and he explained why he wanted certain things in place, most of what he shared with us was short-term goals. We had few clues as to the long-term aspirations he had, and we soon discovered that what he told us was subject to each person’s interpretation of that information, which sometimes led to disagreements and unproductive frustration— not to mention more questions.

For example, when we met to discuss our recent new addition to the Downers Grove, IL, plant, we found ourselves wondering what he ultimately planned to do with the large space. We knew we would utilize part of the addition to expand our nickel and chrome services, but when those tanks were up and running what was Steve going to do with the other half of the space? Was he planning to add another service? For that matter, was there a plan to expand in Texas or open up a third location? We’ll never know.

Maybe he had verbalized his short-term plan to a few of us, but beyond that we don’t know what he was thinking. So it’s left to us to pick up where he left off and hope we can move forward in a way that would make him proud. We are grateful he gave us enough insight, high standards and good work ethic to find the path forward from here—even if it’s not exactly as he would have wanted us to.

The Tough Discussions
We can’t count how many times we sat in a meeting and said, “If only dad were here, we could ask him.” That’s probably normal, but it is also frustrating. If only we’d had the tough discussions while he was still around. It can’t be emphasized enough—get a succession plan in place while there’s still time.
We can assure readers that while they may assume they know their families, they really don’t. No one knows what’s going on in someone’s head unless they are asking the hard questions.

Earlier this year, Stacey participated on a panel addressing the topic of succession planning. The event was hosted by the Young Leaders group of the Tooling and Manufacturing Association, a group she currently chairs, and a fellow panelist told of how his family had been putting a succession plan in place for the last 8 years and it was not the first time, as this business was currently being run by the second generation with the third soon to take over. This company understood the importance of grooming successors to take leadership roles in the company.

The opportunity to network with professionals in similar business and family situations has been tremendous. Not only do we now have several mentors to turn to for any variety of issues that come up, but we also know we’re not alone.

Going Forward
It has been an interesting and certainly educational experience, growing into our roles as leaders of Bales Mold Service. When our dad and his brother Mike started out they became known to their customers as “the Bales Boys”. Now we’re establishing ourselves as “the Bales Girls”.

With the help of our family and the Bales team, and especially of Harry Raimondi, Bales’ Technical Services Manager, we have worked to get more involved in various industry organizations and we are meeting friends and customers we might never have come to know if our circumstances were not changed by the loss of our dad. We’ve grown in ways we never anticipated, and we’re out there proving ourselves every day, but it’s been a great journey overall. Our customers see that Bales is still strong and able to serve their needs.

We have learned to accept that our dad is not coming back, though some days are still kind of hard. We’ve also learned to surround ourselves with accountants, legal advisors and other professionals who have our best interests at heart—people we can trust and can ask the hard questions that come with running a business (Part 2 next month with examine the legal and accounting aspects of a business succession plan.)

Needless to say, we’ll be putting a succession plan in place to provide a more secure foundation for future generations as well as for our employees so that they will not have to learn the lessons we learned the hard way.