Bohler M333 Isoplast is a recent development from Bohler (Austria) and is exclusively available from Edro Specialty Steels in the United States.

Bohler M333 Isoplast is a recent development from Bohler (Austria) that is exclusively available from Edro Specialty Steels (Edro) in the United States. The material has been designed and developed for mold inserts with high demands for toughness, polishability, corrosion resistance and thermal conductivity. It is supplied in the soft, annealed condition and used after heat treatment to 50HRC using Bohler heat-treatment specification recommendations.

Edro says that M333 Isoplast is produced using an optimized chemistry, a modified production process and the latest steel re-melting technology known as Pressure Electroslag Remelting (PESR), which is a modified remelting process that results in improved purity and homogeneity. Nitrogen is added as an alloying constituent during the PESR process.

M333 Isoplast has toughness that has been increased to the same high level as H13ESR at 50HRC. It has approximately three times the toughness of 420ESR at similar hardness levels. Edro says that M333 Isoplast has polishability that is ideal for molds requiring the highest surface finishes and provides consistent savings in polishing time and mold polishing costs. According to the company, the unique chemical composition coupled with the modified production process results in improved corrosion resistance and thermal conductivity. 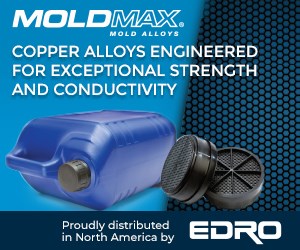