Engineering the machine and process to work as consistently as production hardware ought to perform is where the company says its efforts have been focused.

An assembly of components 3D printed using the selective thermoplastic electrophotographic process (STEP) process. I build this assembly in the video below.

“We have no prototyping mission at all,” says Bruce Bradshaw, chief business and marketing officer with Evolve Additive Solutions. Earlier this year, we reported on Evolve’s production-speed “STEP” technology for additive manufacturing, which 3D prints by applying polymer onto rollers like toner in a document printer. Unlike earlier polymer 3D printing technologies, this one has no role in making short runs or prototypes, but instead is being developed solely for scale production on the order of 1 million pieces annually. The company expects full commercialization of the technology in 2020. I recently caught up with Bradshaw to get an update of the progress.

To illustrate the machine’s precision, he showed me the set of ABS sample parts seen in the video below, which are as-printed except for cleaning away support material. The video shows me attempting to assemble them for the first time, unrehearsed. The assembly went well—the fit is not as perfect as, say, machined metal parts, but the dimensions of related parts fit together smoothly enough to suggest a dimensional repeatability appropriate to production. 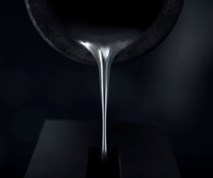 Bradshaw says working out the kinks to make the system reliable for production describes much of what the company has been giving its attention to. An example of one such kink: Slight roundness error in the printhead rollers can produce dimensional uncertainty, which the company is learning how to compensate for through control calibration.

There is also ongoing analysis and reengineering of the machine just to make it robust. “If it gets used daily in a two-shift operation, as we hope, then there is only so much maintenance the user can afford to put up with,” he says.

Then there is the crucial matter of secondary processing. If the machine is additively producing parts at a rate of more than 100 pieces per hour, support structure removal has to proceed at the same rate. Ensuring the secondary process keeps pace is a vulnerability the company is currently working to overcome, he says. Part of the solution is proving to be support-structure design. Water-soluble supports that are 50 percent solid and 50 percent air ensure greater surface exposure to water, speeding the supports’ dissolution.

Work such as this will be done by Q4 of 2019, Bradshaw says. In that quarter and into early 2020, final or near-final versions of the STEP machines will be delivered to five beta-test customers, all of which will use the machine in production applications.

Video: The Importance of Reshoring Mold and Die Manufacturing