A variety of materials were tested and evaluated, with all but one failing by comparison.

Testing required rugged equipment to handle the 4,400 pound side load and offset.

Common results seen during testing, until a winning combination of engagement geometry, materials and treatments, particulate capturing, and lubrication distribution resulted in no wear even after two million cycles.

Longevity of a mold’s alignment locks is critical, as the component protects the mold’s core inserts from damage and potential part rejects due to flash.

There are numerous commercially available locks on the market; most all have the same design appearance and near identical dimensions. While other industries will accept standards such as Mean Time Between Failure (MTBF), currently the molding industry trusts alignment to components that have no performance data to reference, with material and treatment selection that has been for the most part arrived at through "rule of thumb" experiences.

Use Hybrid AM to Produce Longer-Lasting Multi-Material Molds

It was recognized that a means of independently accumulating performance data would not only be valuable for selecting the best available treatment and improving the design, but would also supply valuable data to chart more precise application recommendations.

Accelerated Wear Testing
The drive to engineer an alignment component that would outperform all others led to the construction of a lock testing fixture for accelerated cycle testing and the search for a MTS 810 load frame cycling machine that could endure the harsh cycle testing. An independent lab was found that tested dozens of different alignment locks from the U.S. and around the world using the fixture. Testing covered numerous material and coating combinations in order to accumulate wear data, all thought to be best in class by the customers that use them.

It would be cost and time prohibitive to cycle a machine at loads that would be considered "mild" in the field, as each configuration could conceivably cycle for several months. Instead, testing was accelerated to a side load that equaled 4,400 lbs to simulate the misaligned entry of a movable mold half and the mold platen suffering from mold sag.

The machine cycled to open and close the lock sets for the full length, exiting at each stroke as they would in a mold. The process required a large amount of analysis, and establishing a baseline from cycle testing was key. The varying degree and type of wear was charted to outline what had to be overcome in order to set a new standard of performance.

It was revealed that some of the low-cost locks often performed for a fraction of the life of “brand name” locks, and even those more recognized name brands failed under this rigorous test condition.

Trying Options
Encouraged by the ability to now gather actual data, it was hoped design deviations would deliver improvements in performance.

The manner in which locks become engaged was initially examined. Knowing that real-world conditions could cause the movable mold half to eventually sag out of alignment, a method was needed to lessen the effect of this condition.

Utilizing principles from high quality engineered gears, profiles on the male and female were developed and machined as "engagement ramps" to provide a better way for a mold half to be lifted into position versus the sharper corner radius design that locks have traditionally used at the engagement lead-in.

Along with wear that occurs due to engagement impact from sagging mold halves, dust, debris and other particulate can often find its way onto the lock’s surface and can begin to “ball up,” gall and lead to lock wear and failure.

To eliminate this from occurring, several types of grease retention geometry were studied. Based on the findings, particle rings were designed onto the male lock surface to capture any particulates as well as to contain a light application of FDA, food and medical grade grease. While this low migration grease selected for these particle rings is utilized in the most stringent medical applications, it can be easily removed to run dry if the molder prefers.

A large variety of steel and treatments were tested and evaluated, with extra care taken to maintain the optimum depth or thickness of the surface treatments.

Testing Results
After testing numerous configurations, both 'custom' and commercially available, the addition of design improvements including the engagement ramp and particle rings, and specific material and coating selection far surpassed others tested.

In all, over 21 different combinations were tested, and it was revealed that some failed nearly immediately with 67 cycles to 200 cycles, while others in the industry lasted several times longer. Overall, the harsh conditions of the testing would often yield a failure in less than 100,000 cycles.

The style lock that ultimately endured rigorous testing and hence became a new standard not only did not show wear within 100,000 cycles, but it still showed no initial signs of wear to the point of testing being stopped at the 1,000,000 cycle mark. Then, "just for fun," cycle testing continued to 2,000,000 – still with no signs of even the slightest initial wear.

In addition to design improvements to increase wear resistance, an arced relief was added onto the face of the male locks to reduce the possibility of falling parts standing on the lock face and being crushed upon mold close. Traditionally addressed by adding an angle to the lock installed at the bottom of the mold, the arced relief offers this benefit without significant reduction of lock engagement surface.

Summary
Misalignment of mold halves can result in expensive mold damage, downtime and part rejects. Now, led by independent test data we are able to provide a significant increase in longevity with more accurate application guidelines for the designer.

Testing data shows the proper use of this improved alignment lock will reduce or eliminate unscheduled mold stoppages due to alignment issues. In addition, the time spent on research, testing and product improvement will benefit the entire industry by keeping molds running at longer intervals between large scale maintenance and repair. 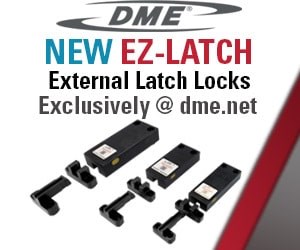