The toolholder/spindle interface and its impact on the high-speed revolution.

Figure 3. Gauging is available in many different configurations and prices.

Offshore competition. Outsourcing. China. Subsidies. All scary words that are bandied about quite freely in our industry. Fortunately, they are only words. Most often, the true obstacle in the path to our success is of our own making, or at best, our own neglect.

In order to increase our profits and bolster the success of our enterprise, we can either cut costs or raise prices. When raising the price is out of the question, how can we cut cost without negatively impacting our product? 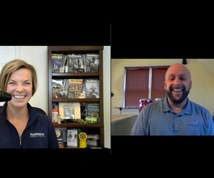 Much has been written about efficiencies of labor, about reducing machining cycles, and increasing tooling life, but what about simple shop practices?

One of the things that has struck me over the last 10 years of visiting shops has been the almost universal disregard for the condition of the toolholder. Harsh, but true. Toolholders are left out on workbenches along with cutting tools, hand tools, fixture components, and all the other detritus of manufacturing. The result? Toolholders that are banged, bruised, nicked and chipped.

Working with many types of toolholders, this hasn’t presented too much of a problem. Now, in the first part of what is truly a new millennium in machining, it is a large and growing problem.

Think about it. When I first started working in the trades, somewhere around 30 years ago, 5,000 rpm was considered high-speed, a really radical number. Now I routinely tell customers that we consider “high-speed” to start around 20,000 rpm. Feedrates and stock removal rates continue to keep pace with spindle speeds, as cycle times are slashed and accuracy held to increasingly tight tolerances.

The driving force in this high-speed revolution has not been, as many suppose, high-speed spindles, but rather, the toolholder/spindle interface, which allows for higher speeds and better accuracy. You can turn an ANSI B5.50-94 30 taper toolholder at higher speeds, but the fact is, without extensive modifications, it’s difficult if not impossible to improve its accuracy and repeatability.

HSK Interface
The HSK interface is the one that seems to be most commonly used to push the envelope of speed and accuracy. This non-proprietary toolholder is capable of transmitting large amounts of torque very accurately, but to do so, it needs to be properly cared for.

The taper diameter tolerance of an HSK toolholder is measured in microns, and it doesn’t take much of a bump against a tee-nut to make a dent or raise a burr of more than a few microns. Once that happens, the toolholder no longer functions as it should.

How to Add Value
This is our chance to add value to our product by subtracting damage to the toolholders used. Simple things—such as cleaning the tapers and bores of HSK tooling, proper assembly techniques and proper storage equipment—can go a long way toward eliminating taper damage and ensuring that your tooling can deliver all the performance it’s capable of.

Once the storage issues are settled, it’s time to take a look at what you will be storing. As I noted above, the tolerancing on an HSK toolholder is very tight indeed. Ask yourself, honestly, if your shop could hold a tolerance in the range of four microns, or one-and-a-half ten-thousandths of an inch. This, not just in one point, but along the length of a taper. Right. Not many other shops can either!

That said, every time you buy tooling that doesn’t conform to the HSK standards, it costs you money. Nonconforming tooling may have radically different performance characteristics than tooling that does conform, and that could have serious implications for your machine, your spindle and your finished parts.

It used to be a truism that the end user couldn’t afford to buy gauging to check toolholders. After all, why should they? 7/24-style holders were relatively loosely toleranced, and so were the receivers. As long as it mated, and the parts looked okay, everything was good. Now, it’s close to a truism that if you are using HSK tooling, you can’t afford to not have your own gauging. There are many fine, high quality toolholders on the market today. Conversely, there is a lot of junk out there as well. It’s impossible to tell by looking at it which is which.

To protect yourself, to protect your investment in machinery and tooling, and to add value to your products by maximizing the realized benefits of the HSK system, check your toolholders with certified, traceable gauging to verify that it is indeed what the salesman says it is.

This gauging, which was once beyond the means of many shops, is now avail-able in many different configurations, and at a price that makes sense. Whatever type of gauging you buy, it’s important to remember that without traceability, the gauge is worthless. You have to be able to see what the actual gauge master was checked against, who said it measures what, and when (see Figure 3).

It seems to be a lot of trouble and expense, but looked at against the value you add to your product by using quality tooling in your production, and by maintaining that tooling at optimal condition, it really isn’t much. Today, a difference of a few percent in the bottom line can make or break a shop, and these small things just might give you that few last percentage points you need.