A look at magnetic workholding solutions, applications and benefits.
#workholding

More attention is being paid to workholding solutions as companies look to reduce the number of times a workpiece is handled before it is completely machined. Vises have always been popular on milling machines, and the new breed of 5-axis vises offers high clamping forces while minimizing the keep-out zones created by the workholding solution. 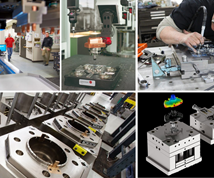 If you are planning on processing all six sides of your workpiece on a milling machine, a vise can complete the machining process in two operations, provided your machine has a sufficient number of axes or angle heads to reach all of the faces. First, simply machine the three exposed faces while the part is in a vise. Then flip and rotate the part and place it back into a vise to expose the three remaining faces for machining.

Another option is to machine one side of the part, then clamp it on a pedestal and machine the five remaining sides. Eliminating the flip then rotate process while indexing the part is critical, as doing this can actually reduce fixture costs and scrap rates. Scrap can occur when an operator does not properly position a finish-machined surface into a mating jaw for a subsequent operation.

The reduction in fixturing costs is simple when the pedestal is the magnet, which will be shared over a large number of workpieces. If you do not need to machine a set of jaws to mate to the geometry you just machined, then you can save on the dedicated tooling costs as well. Products such as an electro-permanent magnet are already popular in mold shops as they are the normal method of holding workpieces on sinker EDMs and surface grinders.

Unlike traditional clamping systems, where the part is held by being squeezed between two jaws, a magnetic chuck creates pull on a steel workpiece from one face only. The part can literally be placed on a magnetic pedestal presenting full five-sided access to the cutters. It will also not spring due to clamping pressures when you release it.

This possibility allows parts to be machined with all key details finished in one chucking, where traditional clamping solutions would require two. Eliminating the need for multiple chuckings removes a source of error—the second chucking—and is fundamentally more efficient.

In recent years, the trend in tooling and cutter-path programming has moved away from heavy chip load/high-force machining and toward light chip loads/high-speed machining, which again plays directly into the strengths of magnetic workholding, being that the forces are lower.

Requirements for operations other than milling also can be addressed by magnetic workholding. If a workpiece cannot be completed on the milling machine alone, it will become necessary to move the workpiece for additional processing. When this occurs, the part can be transported while it is still on the magnet, if it is integrated with a zero-point clamping system that uses precision retention knobs to pull the magnetic pallet with its workpiece attached, into a predefined location on the machine tool and holds it rigidly for machining. This system can be incorporated on mills, lathes, EDMs, grinders, inspection machines, gun drills and other machine tools to eliminate lost time and errors associated with unclamping a workpiece and then reclamping it for a subsequent operation.

When integrating magnets with zero-point clamping systems, electro-permanent magnets are used, meaning electrically switched, permanent magnet units. The electrical cable only needs to be connected to load the part—once the part is positioned, the chuck is energized (switching time is under one second) and the cable is removed. This gives the flexibility of moving the loaded chuck from one zero-point clamping station to another without limit, including submersion in sinker EDMs.

The chucks use 50mm square poles and have been optimized for minimum Z-height, minimized weight, and are available in standard or high-power versions. A grid-style chuck layout with 50mm square poles lends itself to the use of top tooling to raise the part, locate the part and improve grip.

The basic magnetic accessory is the fixed pole extension, which raises the part off of the chuck face providing cutter clearance. These can have an enhanced friction coating or a standard, ground finish. The fixed pole extension is commonly configured to be smaller than the work, so the top of the workpiece and all four sides can be machined without any workholding interference.

Another option for holding parts with a magnet is the grid plate—a single-piece plate that covers the magnetic chuck, is machinable, and may be pinned to the chuck for interchangeability. Most commonly, these are used to mount multiple part locators for quick and effective part changes.

Now that magnets offer high clamping force, the fixturing process for rectangular workpieces is simple. Machine the face with the least amount of geometry first and then set that face on a magnet attached to a zero-point clamping system and then transfer the assembly throughout the shop until it is completed and inspected.