A prototype shop manager at a global cleaning, sanitation and service company thought outside the box when he rotationally molded a liquid soap dispenser in record time for testing on a production line halfway around the globe.
#analysis #regulations #consumer

Most model makers would have blow molded the small, amphora-shaped soap bottle that weighs less than one ounce. However, this process could have required as much as 15 weeks of preparation. Since time was of the essence, Jack Thomas, a 28-year veteran at Ecolab, Inc. - a global cleaning, sanitation and service company - and current engineering group leader of the company's Prototype Shop (Mendota Heights, MN), utilized the rapid cut tooling (RCT) process to form an aluminum mold, which was then sent to a local company where the soap containers were rotationally molded. In just four days, Thomas had 30 prototypes in his hands that were completely seamless.

Typically, Ecolab produces most of its product containers via blow molding. But, this process requires weeks of leadtime and is usually reserved for mass production projects. Ecolab struggled for several years trying to devise an efficient method to produce a product container quickly that simulates a blow molded container and can be used as a prototype for production testing. This summer, Ecolab's Australian subsidiary needed 30 soap bottle prototypes in a matter of days, which represented a perfect opportunity for Ecolab to rethink its usual process of producing a plastic prototype and adapt the rotational molding process. 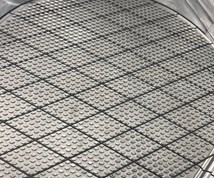 The prototype soap bottles were required in order to fulfill a large order for Australia's largest international airline. The new containers were just one part of an overall refurbishment and upgraded product security program for its international and domestic aircraft. The airline's previous handsoap supply featured screw tops or bulk reservoirs with basin-mounted pumps, both of which were susceptible to tampering.

"The new bottle concept features a snap-top pump, which cannot be removed or replaced," says Ken Blee, national operations manager in Ecolab's Castle Hill, Australia office. "Although the project began in early 2000, the airline accepted our proposal in mid-May. This meant that our stock had to be available by early August, which was only a few days after the production run of the bottles."

Because of this tight schedule, Blee contacted Ecolab's R&D facility and requested 30 prototypes from the Prototype Shop.

Stage 1: Making the Mold
"At this stage, we had the concept and a drawing, but from an operations point of view, we wanted to have some bottles to complete the packaging, which included sealing them in a bag and a carton," Blee explains. "There was little time to design and build the jigs needed to secure the bottles during filling and capping.

"Up to the challenge, we requested the IGES file for the containers from the New Zealand design firm that created the production bottle mold. We, in turn, took the computer image of the part and created the tooling paths in order to construct an aluminum mold on our CNC machine using RCT." Normally, the company would not have considered rotationally molding such a small part, but it was searching for a timesaving solution.

It took two-and-a-half days to develop the tooling paths and cut the mold, which had one insert for the container neck. They also created a bracket so that the mold could hang in the rotational molding spider. It must be noted that RCT cannot be used for all molds. For best results, the mold must be fairly straightforward with no undercuts in the tool, so once the part is formed it can be removed from the mold.

"In this particular case the resin utilized was a polyethylene," explains Jennifer Schwiebert, manager of technology development at Solar Plastics. "The cycle time to rotationally mold the soap bottles took 24 minutes, which included heating, cooling and servicing. We've done similar projects for Ecolab where we've processed aluminum molds that they have machined in order to produce a limited number of containers in a short leadtime."

She adds, "Normally for a cast aluminum tool there's an eight- to 12-week leadtime in order to produce a wood pattern, pour an aluminum casting and perform finishing work. Ecolab was able to reduce the leadtime to days utilizing its RCT capabilities."

Schwiebert would agree that from a prototyping standpoint, the rotational molding process is in fact ideal if a tool can be machined quickly.

"Though servicing this part was a bit more cumbersome than in a normal production setting, we knew that the tool only had to run for a short period," Schwiebert says. "We were able to keep some of the costs out that are normally required for a production run, such as the manner in which the clamping was done and not relieving the backside of the tool. These factors also reduced the time required to actually produce the tool."

Stage 3: Delivery
The molds were delivered to Solar Plastics on a Thursday, and 30 prototypes were ready the next day. They were promptly shipped to Australia on June 18th.

"We were delighted," Blee enthuses. "Ecolab Australia was able to prepare the equipment for manufacture and was confident in our ability to package the products with three weeks to spare."

Ecolab's Prototype Shop has teamed with Solar Plastics to rotationally mold other product containers, such as those for a vegetable wash dispenser and a detergent capsule. This is the first project, however, in which the development process progressed so quickly. Thirty prototype bottles were successfully produced in just days versus a few weeks. They also were an excellent representation of the finished product, which will be blow molded.

Ecolab is convinced that utilizing the RCT process to form an aluminum mold, which is then rotationally molded to create a part, can represent an ideal method to rapidly prototype a product container. The process has the potential to significantly reduce a product's time-to-market. In this case, a 15-week leadtime was reduced to four days.