This moldmaker plays it close to the vest with strategies and practices, but one can learn from its serious investment in the latest technologies to provide quick-turn and RP tooling in record time.
#leadership #casestudy

When he started his small company 28 years ago, Delbert Vawter had no idea how much Injection Mold, Inc. (North Vernon, IN) would grow—and have the ability to produce prototype and production molds so quickly for the electronics, telecommunications, automotive and appliance industries. Finding this niche has brought the company success.

As a matter of fact, Joe Vawter, general manager of Injection Mold and Delbert’s son, attributes the company’s speed as the major factor in its success. “We have customers now that will come straight to us when they need something quick—without even considering their other suppliers,” Vawter comments. “We have proven our reputation as far as the speed and the prototype end. Even our RP work is production ready and dimensionally correct. 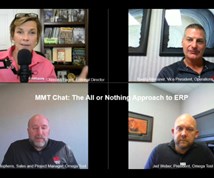 Delbert Vawter started the company in 1979, renting out space in a local garage. He wanted to be his own boss after first becoming an apprentice and working in the industry for several years. Vawter points out that at first, his father started his shop to build lens molds for the automotive industry but the automotive market was slowing down due to high gas prices. So he went after the bottle business—machining replacement parts and building thread split molds. Then, the mid-1980s recession hit and the bottle business declined. Delbert then decided to focus on building tools for molders.

Over the years, Delbert slowly added employees and was able to move into Injection Mold’s current facility in the mid ‘80s. Vawter grew up in his dad’s shop sweeping and mopping floors. “I started at the bottom and worked my way up to where I am today,” Vawter notes. He has two brothers—a school teacher not involved with the business and a firefighter who helps out on his days off.

Approximately five years ago, the company hit a bump in the road, and Vawter sat down with his father to reevaluate the company’s goals. “Business was down a little, and China was heating up,” he recalls. “We discussed the work that was coming in, and decided we should capitalize on producing prototype tools—whether they are P20 or aluminum. Although the overseas price on these items was good, as far as deliveries, they couldn’t meet deadlines that companies wanted. So we hit that pretty hard.

“Our specialty became quick-turn tooling—whether it is production or prototyping tools,” Vawter continues. “Our standard deliveries on prototype tools to have parts is five to 15 days. Our production tools are five to six weeks. However, we build all tools so they are capable of running production if needed. Our customers use these tools until we are able to complete production molds.” Vawter adds that entering the RP market takes a “lot of time, effort and money.”

Then, Injection Mold began to invest in all of the latest technology. “We revamped our whole shop—going from older CNCs to new high-speed mills (Roeders), EDMs (Charmilles) and software (Unigraphics),” Vawter notes. “We were fortunate to have been able to save some money, and also work with the machine manufacturers for some longer terms before we had to pay. We figured if we had the machines here in the shop—running for six to eight months—we could generate enough income and profit to pay them.” Additionally, the company purchased four molding presses so it could sample and validate everything before it is shipped to the customer.

Within the next month the company expects another high-speed machine to be on the floor (Roeders RP800). “This will give us the opportunity to build larger prototype molds,” Vawter emphasizes.

He does some of his research on new technology to purchase via trade magazines, but largely through word-of-mouth. “What is most beneficial to me is going in and talking with other tool shops—not necessarily ones that I compete against—to see how they like the equipment. They will tell you if they had any problems and what to look for versus just painting a pretty picture. I also have companies that call upon me. When I buy new machines, it is often worked out with the machine manufacturers that I will serve as a reference for other companies.”

Most of the time, Vawter sends his employees to his suppliers’ headquarters for training on new equipment; occasionally the manufacturer will come to the facility so more people can be trained at the same time.

Vawter notes that Injection Mold has developed its own version of lean manufacturing through a great deal of research and development. While he declines to share the details, he notes the company has established programs that have enabled them to speed up the design and build process. In turn, Injection Mold cuts costs to its customers. Automation has a big role in these practices. The company currently is putting robotics in place and is working toward having more hours of machine time per day.

“We are finding ways to do things faster and more efficiently,” Vawter states. “We have put our own twist on things and are constantly striving to get leaner. By keeping these methodologies private, we have found success.”

Injection Mold is fortunate to have hardly any turnover. “We have a good work environment—it’s flexible and enjoyable,” Vawter says. “Family comes first. We are flexible employees. We all get along like one big family. The guys on the shop floor have a Survivor mentality.”

The company’s employees really take ownership of what they do, according to Vawter. “We have a nice profit sharing program in place,” he states. “The more we run through here and the more profit we make, the more it benefits everyone. As a result, the employees push each other to do excellent work.”

An expansion is definitely in Injection Mold’s future. The company will either build next to its current facility if they can purchase the land around them or they will build a new facility in another location. “Once our new equipment arrives we are pretty much out of floor space,” Vawter acknowledges. “And, once that equipment is up and running, we are looking to bring more people on board for new business.”

Vawter believes Injection Mold’s most outstanding achievement has been surviving in uncertain times and still being able to grow. “We offer our customers what they can’t get from our competitors as far as speed, timing and quality.”