Milling magnets offer moldmakers the convenience of fully accessible five-axis machining in one setup with the benefits of cost reduction and tolerance improvements.
#workholding #leadership

Figure 5: Magnetic modules used on a radial drill at PME.

Figure 3: Squaring up on a permanent milling magnet.

Figure 4: Roughing cuts on a round pole chuck at PME.

Figure 2: Magnetic setup blocks allow for parts to hang below while work is done on the backside.

Machining practices have come a long way in the last 15 years. Parts that previously took a day to machine can now be machined in hours. Increased productivity through faster machines and new cutting tools has enabled companies to be more competitive. However, many of these companies are still using the same clamping methods that they used in the 1920s - toe clamps and vices. And although machines are faster, setup time has not changed significantly. In addition, machines today have the ability to machine in up to five axes, yet most conventional fixturing does not give total access to all five faces of a part. 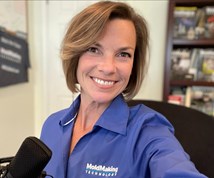 What Are Magnetic Chucks?

Electro magnetic chucks use a constant supply of electric current through a coil around a soft iron core to create the magnetic field perpendicular to the coil. Electro magnets can generate large magnetic fields, but if power is lost, so too is the magnetic clamping - making them impractical for pallet changers and machining centers. In addition, it is important to note that electricity through an electro magnet generates significant amounts of heat within the chuck and on the surface.

Magnetic setup blocks are the latest advancements in permanent electro milling magnet technology. They are designed to offer greater flexibility than the conventional milling chucks without sacrificing holding force. Previously, mold shops had to purchase a milling chuck of a given size if they wanted to use milling magnets. If the part to be machined was 1/3 of the chuck size, then 2/3 of the chuck went unused. Or if the part exceeded the size of the chuck, there was no means to stretch the chuck for even support. The only option then was to either do it the old way or buy another chuck. The introduction of magnetic setup blocks gives the shop greater flexibility and profitability because each module offers the same clamping force as a pair of balanced poles on a milling chuck (see Figure 2). The bonus is that if a job requires fewer modules, then the remaining modules can be used on another machine - hence there is no wasted magnetic area. Because the modules are permanent electro, one controller can fire infinite setups.

On the other hand, if a larger part needs to be machined, the modules can be spread apart for better distribution of the magnetic force (see Milling on a Magnet for restrictions). Additional modules can be added as needed to increase the coverage area. Unlike conventional milling chucks, which do not allow for slight movements in pole placement, magnetic setup blocks can be located wherever the best contact area is available. When mounted to a sub-plate that is drilled and tapped on one-inch centers, placement is easy. In fact, a setup on a sub-plate can be moved from a drilling or milling operation to a grinding operation without demagnetizing the modules. The grinder would clamp to the sub-plate and the modules would continue to hold the workpiece.

Milling on a Magnet

What was once considered a black magic has become a more calculable science. Still, many variables affect the clamping force of a magnet. Some of these variables include: material composition, surface finish, contact area, vibration and cutting forces. An important fact to understand about magnetic clamping is that all magnets have 100 percent clamping force directly away from the face of the magnet, but only 20 percent clamping force against slide forces. This is the coefficient of friction. Often people will improperly judge a magnet's ability to hold for machining by striking a magnetically clamped part on the side with a mallet.

Unfortunately, this does not accurately replicate machining forces. Cutting forces are usually multi-directional - including down into the table. Serious manufacturers of milling magnets offer cutting formulas to aid in the determination of viable cutting parameters. In some cases, cuts on a magnet will exceed conventional clamping due to reduced vibration or increased holding force. In other cases, cuts may have to be reduced for magnetic clamping. In these cases though, the additional cut time may be offset by either a reduced number of setups or increased feedrates. The addition of physical stops can increase stock removal by up to two times over not using stops.

Steel
Mild steel is the most receptive material to magnetic clamping. Tool steels are 15 to 30 percent less permeable and cast iron is 30 to 50 percent less permeable than mild steel. Therefore, moldmakers need to be aware that cutting calculations need to be adjusted when other material, such as tool steel, are considered. Magnetism does not like air gap, whether caused by surface finish or vibration. Air gap is any space between a workpiece and the surface of a magnet caused by uneven workpieces, rough finish on a workpiece, nonmagnetic spacers like shims, or vibration. Therefore the better the surface finish and proper pole placement - to avoid vibration - the greater success one will have using a magnet.

Finish
Rough finish material can be milled on a magnet if the proper cutting calculations are used. Some magnets have greater magneto motive force (MMF) - a magnet's ability to bridge air gap - and are more suited to regular usage on rough surfaces. Otherwise, a simple down rating on the cutting forces will suffice. Keep in mind, however, that a permanent electro or a permanent milling magnet will not suddenly lose its clamping force. Therefore, if a magnet is overpowered by a cut, the part simply slides across the face of the magnet. This prevents serious damage to the part, cutter and machine as well as injury to anyone near. If a cutter runs through a conventional clamp or if the clamp or vice becomes loose, the part will fly.

Vibration
Vibration on a magnet can be caused by numerous conditions. One cause is too much overhang or too much space between poles. As a rule of thumb for standard cutting calculations, overhang should not exceed the thickness of the part, and the distance between the poles should not exceed 2.5 times the part thickness. Another cause for vibration is an air gap caused by a non-flat workpiece or a rough surface finish. Some magnets offer self-leveling devices to address a non-flat workpiece. Rough surface finish is best handled by adjustments in the cutting parameters or through the uses of a magnet designed for rough finishes.

Polarity
A critical point to understand regarding magnetic clamping is the area in contact with the magnetic poles. It is not the number of total poles in contact with the workpiece that determines the holding power, but rather the number of equal north and south poles (polarity) that are in contact that determine the clamping force. If the area of a part is in contact with more of one polarity than the other, the extra magnetic contact actually interferes with the ability to machine the part. Magnets offering magnetically balanced north and south poles combined make for easier setups.

Advantages
Magnetic clamping offers as many benefits for the small shop as it does for the production machining shop. Magnets can offer full access to all five faces of a part in one setup. For example, a magnet laid flat on a pallet of a horizontal mill will allow the machine to mill around all four faces and drill into all four faces in one setup - an ideal squaring up process.

In addition, the use of magnets also makes programming easier. No longer is there a need to coordinate clamp location with the program. Magnets reduce vibration, therefore tooling is freer to run faster and longer. Through the use of top tooling or modular poles, a block of steel can be faced, edged and drilled through in one setup. With greater access to a part, a machine can run longer unsupervised (lights out) - resulting in higher productivity.

Milling on a magnet benefits both VMC and HMC operators through setup reduction and improved safety as well as reducing the risk of losing your qualified locator by reducing the number of setups. Magnetic setup includes loading parts, indicating parts and energizing the magnet. Energizing a magnet requires less than one second of electricity. In comparison, many injuries during setups are a result of reaching while tightening a clamp, or of trying to support work on a horizontal machine while tightening a clamp.

Other advantages of milling on a magnet include consistent clamping force. Regardless of the strength of an operator, the clamping force of a magnet is a constant. Most milling magnets offer pole extenders to raise a part off the surface of the magnet. This allows not only for milling, but also for through drilling. There also are new individual magnetic setup blocks that can be located anywhere under a part and used as a milling magnet or a magnetic work support with conventional fixturing.

Precision Mold & Engineering Company (PME) (Benton Harbor, MI) - a moldmaking operation - has magnetic milling chucks on six of its VMCs and a set of magnetic milling modules for general shop use. PME finds the milling chucks to be a significant time saver in its roughing and finish operations (see Figure 4). Larry Shermak, PME's plant manager, calculates that PME has reduced its setup time by 50 percent by milling on a magnetic chuck. PME has found the milling chucks to be more powerful than expected. They offer flexibility all over the shop.

According to Shermak, the company will use the milling modules when it needs to work on the backside of an insert (see Figure 2). Previously, the company had to block it up and clamp it. The company could not achieve the flexibility with magnetic pole extenders. However, the magnetic modules allow it to use as many or as few modules as the job requires while the rest of the modules can be used on another machine. The modules have increased the workable area on other machines, such as the radial drill press (see Figure 5) when drilling and tapping holes. If need be, the company can collect all of its modules on one machine for another milling chuck (see Figure 6).

A fear that many shops have had over the use of milling magnets is what happens to the chips. Magnetic field depths vary by manufacturer, but can be as shallow as 0.400" deep into the part. As long as the magnetic fields are in balance, the residual magnetism throughout the part is insignificant. According to Shermak, "Chip control problems are about the same as with any other workholding method. Blowing the chips away with air or flushing them away with coolant are the typical methods to getting the chips out of the way. With magnets, the only chips that are left are ones within the flux height of the magnet."

When milling nonmagnetic material, shops properly trained in the use of magnetic workholding generally only return to conventional clamping methods when forced, such as on aluminum. Even with aluminum, magnet users often use their magnets to hold the vice, which holds the aluminum.