This high-mix, low-volume manufacturer embarked on a year and a half program to introduce robotics to its manufacturing process.

It all started when Phil Allor, President of Selflube, a Michigan-based mold component supplier, returned from NPE 2018. On the flight back, he sketched out a plan—logically but not practically—to add automation into his operation. Allor then met with several robot integrators, and all of them turned him down flat, saying it is not doable. So, he set out to do it himself.

"We found that this was mainly a software problem. Conventionally, to do one part number in a robot cell requires one CNC program and one robot program. But we intended to have a robot cell capable of doing about 2,000 part numbers with many part number changes during the day. That potentially meant that we would need 2,000 CNC programs and 2,000 robot programs. Creating and maintaining all these programs would have been undoable. In that sense, the robot integrators were right.  But to us, not doable meant that we had to find another way," Allor explains.

“The robot cell gives us something that we never had before, variably capacity.”

SelfLube already had a parametric system that creates all of its CNC programs. This could be modified to create robot-enabled CNC programs. This got the company halfway there. For the robot program, Allor rejected the idea of 2,000 different programs.  Instead, he envisioned having a single and likely very complicated robot program that would mimic its parametric system.  SelfLube had a lot of experience with CNC software and computer software but none with robot software. Allor expected that there would be some similarities, so they would not be starting from ground zero on this.  So, to find out what he didn't know, Allor signed up for a robot programming course. He was the oldest one in the class. 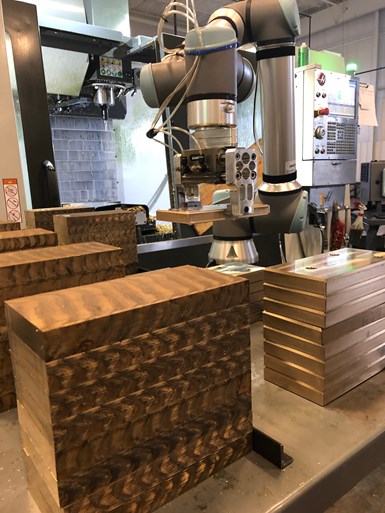 Fast-forward from there, the team identified ten known problems that were potential showstoppers. These had to have acceptable solutions before any significant financial commitment could be made. One by one, these were addressed, and solutions were found. The team also assumed that there was an equal number of unknown problems that were also potential showstoppers.  Here there was a risk. Financial commitments would have to be made before they became known. But with demonstrated success with the known problems, the team believed that the unknown problems represented a manageable risk.

One significant thing that came up that wasn't fully appreciated early on was setting up a production run of multiple parts numbers.  With a single part number, not much is required. But, with multiple part numbers that are changed to on the fly, things get complicated. The team ended up creating a mini-shop floor control system to address this.  One of the critical features of this system was minimal data entry by the operator.  In the finished product, essential scheduling tasks are done solely with clicks. This greatly reduces errors and increases operator productivity.

"SelfLube's business is highly cyclical.  At times we're swamped and turning away customers at other times we're not. Staffing up and staffing down is not a good option because quality and productivity tend to suffer. Overtime works, but it has its limits.  The robot cell gives us something that we never had before, variably capacity. When business is soft, it can sit idle with no complaints. When we're busy, it will cheerfully work lights out a second shift. There is a video feed that can be checked from time to time from an offsite location. If there is a problem, the system can send a text to a designated operator.  This thing easily replicates, so we will add cells as the need arises," Allor says.