2018 AMBA Mold Builder of the Year

The American Mold Builders Association does a wonderful job each year honoring a special individual among its membership with the Mold Builder of the Year Award.  This year’s recipient has been a leader and a visionary in the mold building industry for nearly 40 years. He has hired and developed countless strong leaders under him and is well respected in the automotive industry. His vision and leadership have propelled two companies to the forefront of toolmaking excellence.
#leadership

This year’s AMBA Mold Builder of the Year is Mark Slack, director of operations for Roush Manufacturing in Farmington, Michigan. Photos courtesy of Creative Technology.

This year’s AMBA Mold Builder of the Year is Mark Slack, director of operations for Roush Manufacturing in Farmington, Michigan.  As you can tell by the slideshow, he was a bit surprised and humbled by the recognition.

“It was at that moment that I realized that it was my career that they were talking about and that I would be receiving the award. To be honored in this way at the end of my career and know that I might have made a difference in how moldmaking is doing today, because of my involvement in CAD/CAM or through the young people I’ve hired who are now CAD designers, machinists and moldmakers, is humbling.” 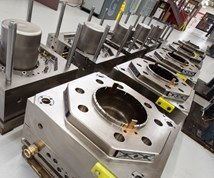 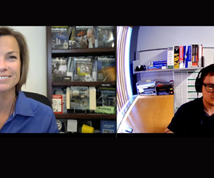 Mark did wish his wife Sally of 36 years and two children, Kaitlin and Ryan could have been there to celebrate with him, but he did have a full house of fans!

As part of the Award, Glenn and Don Starkey of Progressive Components generously donated $5,000, which will be given in Mark’s name to a workforce development/training organization of his choosing. At the time of this writing Mark is still considering some worthy options, one of which is a veterans group for engineering or machining.

The two schools that will receive an equal share of Mark’s $5000 award funds, donated by Progressive Components are:

Director of Career and Technical Education

I personally met Mark a few years ago during Amerimold when Roush exhibited and displayed an awesome Mustang in its booth. And then again at a few AMBA events (I even sat down and shared a glass of good whiskey with him over a nice long conversation😊). He is truly a pleasure to be around and exudes passion for this industry. A well-deserved award.

To give you a feel for why Mark was nominated by several people, I thought I’d share a portion of the speech from last year’s winner, Joe Genc, when he introduced Mark at the AMBA Awards Banquet during the conference:

“Mark has always been very passionate about keeping moldmaking in the U.S. and continually works to develop the labor needed to secure the next generation of tool builders. His work with the local schools has yielded huge success not only for his current company, but for many local businesses that are hiring from these community colleges.

He started in the trade in 1978 and comes from a long line of mold builders, starting with his father and three brothers. In 1986, he moved from Shapiro Mold to become the first employee of a new company. He was charged with the responsibility of growing that company and helping to run the day-to-day operations. That company, CruCam, became the leading provider and servicer of CAMAX CNC software in North America and from 1987 – 1999, had grown to nearly $14 million in annual sales and 150 employees. In 1991, CruCam started machining and building molds and in 1995, purchased Artisan Mold Inc. In 1999, CruCam was acquired by Roush Industries.

After 1999, and under Roush ownership, Mark Slack was appointed the operational director of the business, now Roush Manufacturing. Mark was instrumental in taking the business directly to the OEM level, becoming an interior cockpit prototype integrator for Ford Motor Company in 2005. Mark was then able to leverage the core moldmaking business into a direct OEM market offering and further expanded the company’s reach into a global player. From 2009 through 2013, he rebranded Roush Manufacturing as Roush Global Tooling, and grew the business from $14-million to $40-million in annual sales. Roush became a leader in automotive molds and prototype tools for the industry. Additionally, Roush does 3D printing and prototyping.  In some of the most difficult times in the industry after the recession, Roush managed to maintain its people and customers and return to strength then grew tremendously coming out of that period. Roush did very well and was profitable under Mark’s leadership.

Mark is a strong advocate of associations and participates regularly in AMBA events, OESA quarterly meetings and NTMA Detroit Chapter meetings. As an AMBA member since 2010, Mark was very instrumental in starting the South Eastern Michigan Chapter and has helped to spread the word to AMBA members and non-members about the importance of working as a community. He also was a member of the OESA Tooling Council and currently sits on the advisory committee for the Skilled Trades Program at Schoolcraft Community College. Mark believes in the trade of mold manufacturing and strives to leave a legacy for the younger generation.”